Auckland health workers are continuing strike action over weekend pay today outside the city's hospitals, but the district health boards say the ongoing strikes are getting in the way of a resolution. 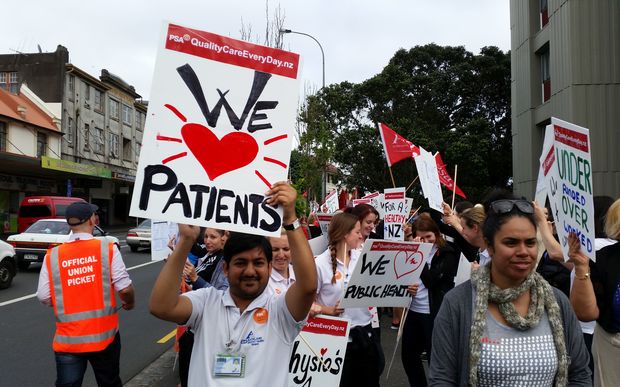 Auckland health workers protest after negotiations on how to extend weekend services came to a halt. Photo: RNZ / Anusha Bradley

Auckland's three district health boards want to cut the amount new staff are paid to work weekends, from double time to time-and-a-half, so they could extend services to meet patient demand.

But the Public Service Association (PSA) says the boards need to find other ways of funding seven-day services.

"The Auckland DHB's plan to stretch five-day services across seven, when they are not even staffed for five, is going to push staff to exhaustion and undermine patient care.

But Auckland's district health boards said the strikes were interfering with negotiations.

The National DHBs Employment Relations Group said the Public Service Association had lifted its strike notices for next week to allow negotiations to continue, but had more planned the week after.

It said that undermined any progress that might be made before mediation goes ahead - if indeed it did.