The New Zealand Transport Agency says it wants to build a shared cycle and pedestrian path between Petone and Ngauranga. 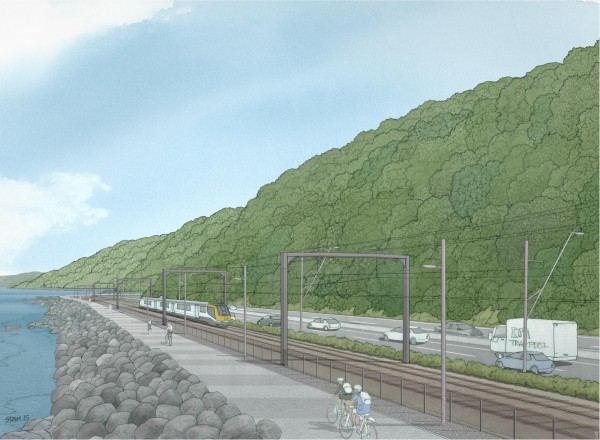 The path would be three metres wide with a metre-wide shoulder on each side, and would be built between the current railway line and the sea. The project will require substantial reclamation since the rail tracks are on the edge of the harbour.

The heads of those three councils all said they were in favour of the scheme and they were delighted with the plans.

Hutt City mayor Ray Wallace said besides helping cyclists, the path would protect the railway line from rough seas during a storm.

"It's a real asset to the region, we're going to see a lot more people cycling, walking and it also gives a resilience to the public transport and rail network."

The agency said the next steps in the project will be to prepare the necessary consents applications.

The project will connect with other proposed cycling improvements, including sections between Petone and Melling and Ngauranga and Wellington CBD.

Wellington mayor Celia Wade-Brown said she was thrilled at what had been decided.

"We've already put $5 million in our budget, the Hutt Valley has put some money in and the taxpayer - through NZTA - will also be funding," Ms Wade-Brown said.

"And it's about time that that beautiful harbour was opened up for walking (and) cycling along."

Two years ago, bad weather closed the railway line and brought traffic chaos to Wellington, so supporters of the track said it would be a useful safety buffer for the railway during future storms.

At present, about 200 cyclists a day make the risky trip along the edge of State Highway 2 but after 2019 that number is expected to more than double.

The Transport Agency will apply for resource consent next year.