A complainant at a trial involving charges of human trafficking has told how the accused arranged for him to come to New Zealand. 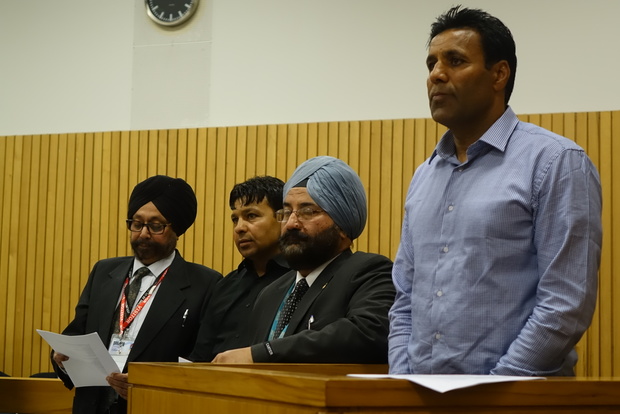 In the High Court in Nelson (from left): an interpreter, Satnam Singh, another interpreter and Jaswinder Singh Sangha. Photo: RNZ / Tracy Neal

Raghbir Singh Kaler told the High Court in Nelson today that he arrived on a work permit, after applying through the office in India run by one of the accused.

Mr Kaler was told, when planning to come to New Zealand, he would get permanent residency after two years, which would ease the way for his family to also come to here.

He signed forms presented to him in an office about 90 kilometres from his village in India, but was later shocked to discover how much he would have to pay.

Mr Kaler said he was told, if he didn't come up with the equivalent of around $30,000, he would not get his passport back.

He told the court he secured the funds from family, and gave the money to Jaswinder Singh Sangha who, along with Satnam Singh, is defending charges of trafficking.

Mr Sangha is jointly charged with a third man, whose name is suppressed, of providing false or misleading information to an immigration officer.

The Crown opened the case yesterday in the High Court in Nelson.

The three men are defending charges laid by Immigration New Zealand relating to the arrival in the country of 18 Indian citizens some seven years ago.

Mr Sangha and Mr Singh, brothers aged in their 50s, were arrested in Motueka in August last year, and the third man was arrested in Auckland a day later.

The Crown is arguing the case was based on arrangements to bring 18 people from India into New Zealand by deception, and stories were fabricated for the sake of large amounts of money - in return for the promise of new lives in New Zealand for the complainants.

The defence is arguing all the allegations are false, and there was misunderstanding around work visas and residency issues.

Mr Kaler told Crown solicitor Mark O'Donoghue, through an interpreter, that he was one of 11 or 12 Indians who together arrived in New Zealand in June 2009, and were then moved into a house in Blenheim.

While there was work available at a vineyard, it was not as much as expected.

Mr Kaler said he got some work, but was not paid. He said he worked only part-time and got groceries in return. He said he was told to open a bank account, but was not informed about tax or the Inland Revenue Department.

Mr Kaler told the court he wanted to earn money to start paying back his family, but was eventually told there was no work and he might have to return to India. The only other option was to apply for a refugee visa.

The trial is scheduled to have 25 witnesses and run over six weeks.