Upper Hutt residents isolated after a bridge was damaged by intense floodwaters yesterday say it has not been properly maintained for decades. 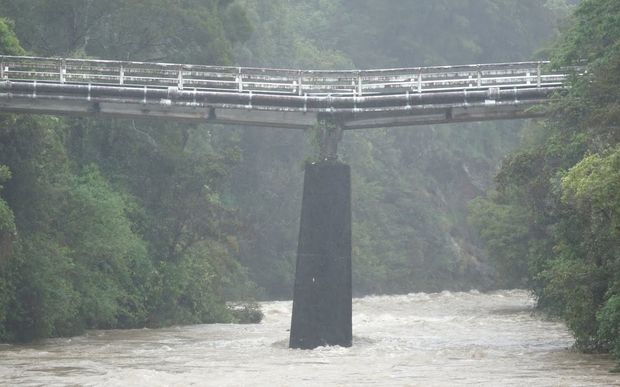 The bridge at Bridge Road in the Upper Hutt suburb of Birchville has visibly slumped. Photo: RNZ / Tom Furley

Floodwaters yesterday damaged the middle pier of the bridge over the Akatarawa River in the suburb of Birchville, cutting water and gas lines and affecting 62 homes.

It will be two weeks before residents isolated by the collapse of the bridge have road access, Upper Hutt City Council said.

Luanne Brooks said she was not surprised the bridge buckled.

"When I came over, dropping my daughter off from school, there was a weird feeling about it... the road is always bouncy, but this was more rocky than usual," she said.

Terri Fordham, who has lived on the street for 40 years, agreed with Ms Brooks.

"There was a weight restriction on the bridge and then the farm up the back started doing forestry and the logging trucks came and they took the weight sign away," she said.

The bridge was last assessed by engineers three months ago and he was confident that maintenance was up to date.

Mr Guppy said bulldozers will be on the ground early tomorrow morning forging an access road through the forest.

"The machine will be on deck tomorrow morning, early, at daylight, and that will continue on until we get that pathway so we can get cars in and out and people can come and go."

Council infrastructure manager Lachlan Wallich said the next two weeks would be spent clearing a vehicle route through the Akatarawa Forest as a temporary measure.

"It will be three metres wide one way... it's about 900 metres long and the access will be controlled by traffic lights at each end," Mr Wallich said. 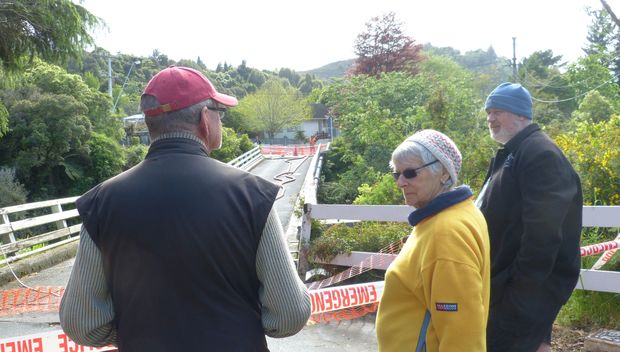 Residents on Bridge Road in Birchville standing near their collapsed bridge over the Akatarawa River. Photo: RNZ/Max Towle

"At the moment we can use a boat community rescue to be able to get in there if we've got any urgent medical reasons, or food."

An Upper Hutt resident who was trying to get to his stranded partner said it had been a rough night for his family.

The residents had their water supply restored last night but were still waiting for access.

Terry Horne and his children spent the night with his sister in Miramar, while his partner was stuck in Birchville.

"We've spoken to the search and rescue. They turned up last night, told her to boil the water and keep warm."

Mr Horne said he would try to get home again today, as his partner had run out of food and his children were shaken up, he said.

"The shopping day is usually yesterday so now I've got to try and find a way to get groceries over there.

"The council, helicopter, anything. Anything to get supplies over there.

"I tried ringing them and ... you get an answering machine. Hopefully they do something about it today."

Resident Margo, who did not want her last name used, said she had been struggling to get details from the council.

"I've phoned twice this morning. Nobody knows anything. Nobody's got anything to add to anything. They haven't said anything in the first place."

A track is available for residents but it takes about an hour to walk it. The council is considering clearing it to allow vehicle access.

The bridge damage sent sewage discharging into the river from broken pipes.

Upper Hutt mayor Wayne Guppy said it was expected the bridge would need to be replaced, and it could take up to six months to do so.

Engineers would today work to establish what was needed.

"There will be a lot of options discussed today but the first thing is we need to have an absolute definitive answer on the future of the bridge." 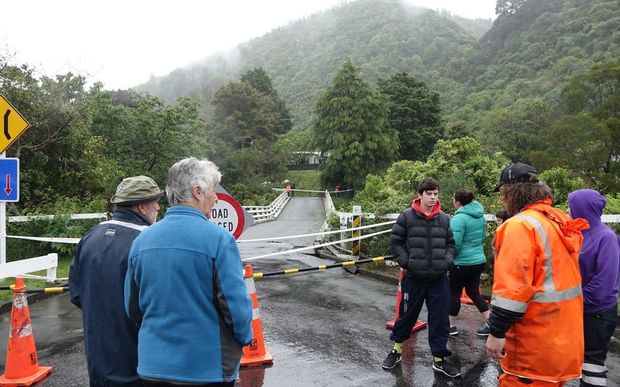 About 70 properties have been cut off by the bridge failure. Photo: RNZ / Tom Furley

A surf casting fishing rod had been used to connect up a temporary water supply to isolated houses, by casting it across the bridge. A rope is attached to connect it to hosing.

"That rope was used to connect hosing that was pulled along and that will give them water which will be connected to the T-section we put in, giving residents fresh and clean water," community rescue team member Kerry Beven said.