A 14-year-old girl horribly injured in a rock-climbing fall has finally received an apology - but it wasn't until her mother hired a lawyer that someone was held accountable. 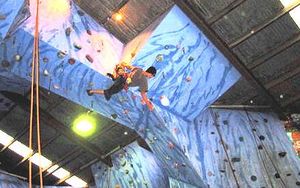 Sophie McCauley was celebrating her 14th birthday with friends at the Rock House in Mt Maunganui when she fell 4m on to a concrete floor, breaking her hip and smashing her foot. She spent time in a wheelchair while they healed, and it's likely she'll get arthritis in those joints when she's older.

WorkSafe investigators initially blamed Sophie, saying she had not checked her equipment properly, but three years on has admitted it wrongly cleared the Rock House of any wrongdoing and failed to do a comprehensive investigation.

WorkSafe's chief investigator has apologised to Sophie and her mother, Debbie, face to face and the family has had input into activity safety guidelines.

"That is the wrapping up of it for us. There is nothing further that we can do," Ms McCauley told Nine to Noon.

"We've had input into activity safety guidelines and the chief of WorkSafe did say that things have changed within the organisation because of Sophie's case, so we've had good results."

Ms McCauley had asked the Rock House for an appropriate time for the party, and had asked about supervision. They were told it was fail safe, and felt confident that the company knew what it was doing.

"She was going up an angled ladder near the entrance and on the way down we heard a snapping noise and she just plummeted to the ground, really, on to bare concrete," she said.

"She didn't scream or cry. She's quite a tough character. They brought her an ice pack over and they gave her a chocolate bar and a rock-climbing voucher."

A friend's parent who had been an emergency nurse was called and, after assessing Sophie, said an ambulance was needed.

Rock House staff provided only an ice pack and did not seem to have any first aid training, Ms McCauley said.

"And none of them had actually seen the accident - they'd all been watching an ice hockey game and they hadn't actually been actively supervising, which was one of my concerns."

The hospital initially thought Sophie simply had a twisted ankle but x-rays soon revealed the extent of the damage; she had the worst break possible in her hip, and her foot was too badly broken to be fixed, doctors said.

Ms McCauley told a colleague about the incident, and they suggested she report it. Both sides were interviewed and safety improvements implemented, including installing safety matting over the concrete floor.

But WorkSafe then concluded there would be no prosecution as it was Sophie's fault, and there was not enough evidence of other accidents.

Ms McCauley requested the file under the Official Information Act but it took 123 days to arrive - rather than the 20 working days it should take - and it was small.

She got a lawyer involved and WorkSafe eventually reversed the finding. However, it was too late by then for the company to be prosecuted.

Despite that, Ms McCauley was happy she had done what she could to prevent such an accident happening to another child.

"She should have had a safe experience there and come home in one piece but she didn't, so definitely a big failure there and WorkSafe, their investigation was not adequate," she said.

"If somebody else's child had gone there and been killed or severely damaged like mine, and I hadn't done everything I could to make that place safer, then you can't live with that.

"Protecting our children - you've got to do as much as you can."