Protesting workers at a Bunnings store in New Lynn, Auckland, have left the building after chaining themselves together and blocking the entrance. 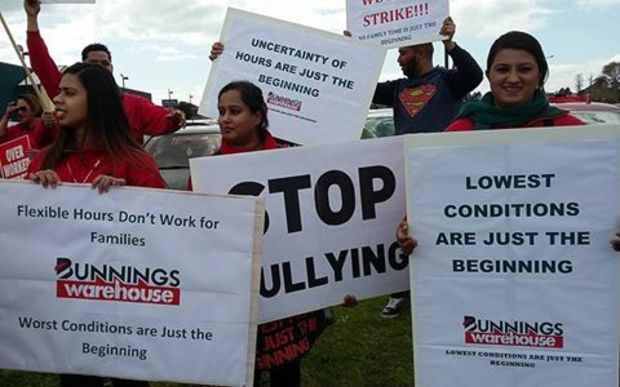 Police said there were about 50 protesters outside the store this morning, including about six Bunnings staff.

About 12 protesters forced their way into the store, damaging the doors to get in. Once inside they chained themselves together blocking the entrance to the store.

The protesters moved on after police attended.

The store's manager Jacqui Coombes said while she respected the right to protest, this went too far.

"What happened wasn't respectful, a number of our team and customers were intimidated, people were stopped from entering and exiting the building."

She said negotiations over the contract were due to resume in mid-November, on the first date the workers' union was available.

Staff have walked off the job at four Auckland Bunnings stores over a contract offer they say demands they be available for work at any time, without the guarantee of stable hours.

First Union retail secretary Maxine Gay said shutting down this shop was just the beginning of their actions unless Bunnings offered a new contract, and workers in any industry deserved to know in advance what hours they would work.

Bunnings said it had put forward an industry-leading contract proposal, but it needed its team to be flexible.

Police were trying to find out who damaged the store's doors.