A helicopter pilot who rescued an injured hunter has pleaded guilty to flying without a licence but been hailed as a lifesaver outside court.

Dave Armstrong is now hoping for a discharge without conviction - and he has the backing of thousands who signed an online petition against him being charged. 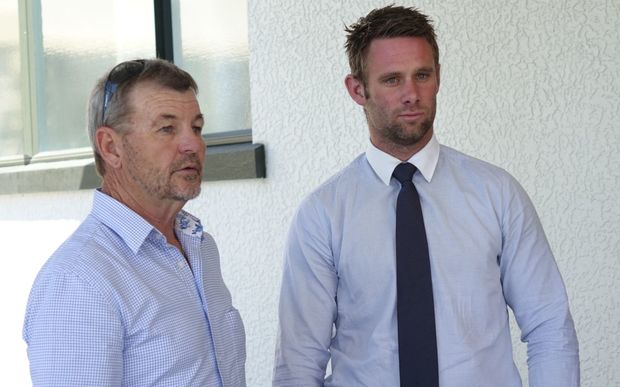 Scott Lee broke his leg falling down a bluff in dense bush near Kaikoura last year while hunting with his partner, Lisa McKenzie.

Mr Armstrong, a veteran local, volunteered to fly in a small team of rescuers after an earlier rescue chopper failed to find the pair due to poor weather.

"If it wasn't for Dave making the decision to fly the rescuers in, I know I would have died in the bush that day," Mr Lee said today.

The Civil Aviation Authority should have dropped the charges, he said.

"I don't know how they can prosecute a man for saving someone's life - this is going to set a dangerous precedent for similar circumstances." Mr Lee said.

Mr Armstrong's license was in abeyance after a medical scare in 2012.

He assisted in another police search and rescue operation two weeks after finding Mr Lee, flying to look for three kayakers on the Clarence River who eventually turned up safe and well.

He said he decided to plead guilty to his charges - flying without a medical certificate and failing to record flight details in his log book - in order to get on with his life.

"I pleaded guilty because I did it, there's no point in denying that," he said. "I just want to get this whole thing behind me so I can move on with my life."

He said the incident had snowballed and taken its toll on him.

An online petition set up by criminal lawyer Jeremy Bioletti has gathered more than 4000 signatures to support Mr Armstrong, who said he was humbled by the support.

"It's truly humbling to have the backing of so many people, it has gone beyond anything i expected."

He has applied to be discharged without conviction when he appears again in the Christchurch District Court on 14 December.

His employer, Kaikoura Helicopters Limited, also faces two charges for assigning him to fly without a medical certificate.