Police are making progress in investigations into an anonymous threat to shoot people at Otago University.

The threat was posted anonymously to the online forum 4chan Monday night and was deleted soon after. 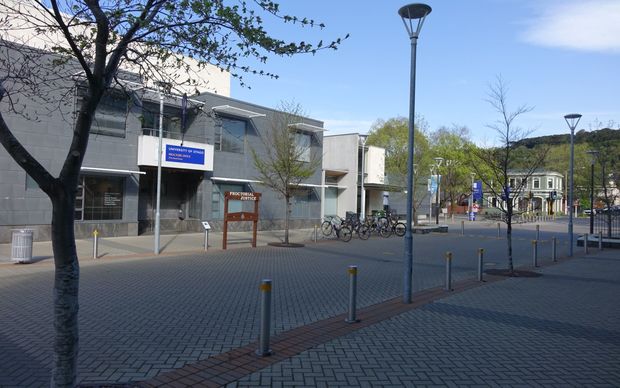 Otago University classes were running as usual but more than two-thirds of students stayed away. Photo: RNZ / Peter Newport

"We've spoken with a number of persons yesterday and will continue to do so today, it's much in progress at this stage."

She would not say how many people police had spoken to about the threat, but said they were talking with a number of different people that were helping police with their enquiries.

Ms Aitken said members of the public were coming forward with names for police to consider.

She said police did not believe there was still a threat, but asked people to remain vigilant.

Police were maintaining a high visibility presence at the university area as a reassurance to students and staff, she said.

Police officers were stationed at the Otago campus yesterday and classes were scheduled as normal but more than two-thirds of students stayed away.

Two other threats were also made to Victoria University and Massey University, but Ms Aitken said it was unknown if they were linked.

Daniel Ayers, a Forensic IT investigator, told Morning Report the GCSB may be called in in a bid to find out who made the online threat.

4chan is hosted in US, which he said made it difficult to get cooperation or legal help.

But he said forensic linguistics, the science of analysing writing style, could be used.

Or if it was classed as a terror threat, it could be dealt with using internet surveillance techniques.