Buildings have been damaged in Otago, and dozens of homes are at risk in Canterbury, as South Island firefighters battle multiple blazes. 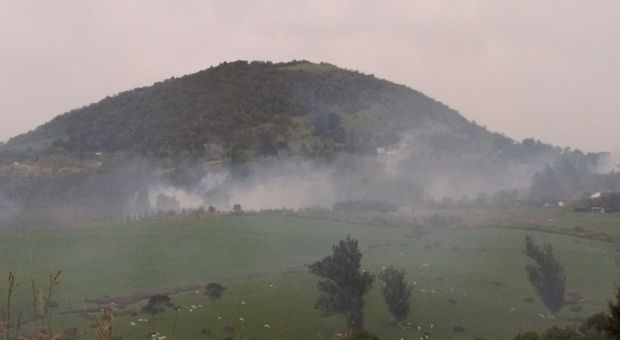 Strong, hot winds have fanned the flames, with fire crews responding to up to 27 mainly scrub fires in the Otago and Canterbury regions.

Families have been forced to flee their homes near Oxford in Canterbury this evening as a fire burns out of control in the Sales Road - Ashley Gorge Road area.

The owner of the Black Beech Bar Brian Clark said dozens of homes were at risk and evacuees were being sent to Oxford Area School.

Further south in Dunedin, the Fire Service said nine buildings have been damaged in a major fire at Saddle Hill, south of Mosgiel.

The fire broke out this afternoon, and a southerly change has helped firefighters to contain the blaze, but two helicopters with monsoon buckets were still working to dampen down hotspots.

Another fire which has been burning at Dunback in north Otago for most of the day, threatening homes, has now also been contained.

In Canterbury, State Highway 1 was closed this afternoon from the Rakaia River Bridge through to Bankside while firefighters battle a blaze on farmland.

The Fire Service said three firefighters had been treated for heat exhaustion and smoke inhalation.

A welfare centre has been set up at the Fairfield Community Hall for evacuees.

But MetService says the strong winds and high temperatures that have been fanning fires in the regions have eased.

Temperatures reached 27 degrees in Dunedin, with some parts of Canterbury getting close to 30 degrees.

Meteorologist Lisa Murray said a south-easterly change was being felt, leading to a drop in the temperature in Otago, where there has already been some rain.

Our reporter at the fire at Saddle Hill said it had begun raining late in the afternoon, and he could see the ash from the fires falling with the rain.

Darryl Baser said, at one house, firefighters were spraying foam retardant onto a fence and front garden.

The temperature plummeted to 14 degrees from a high of about 30 degrees earlier in the day, but the winds were still high.

It is understood the fire, near Coal Stage Road, started about 1.30pm. 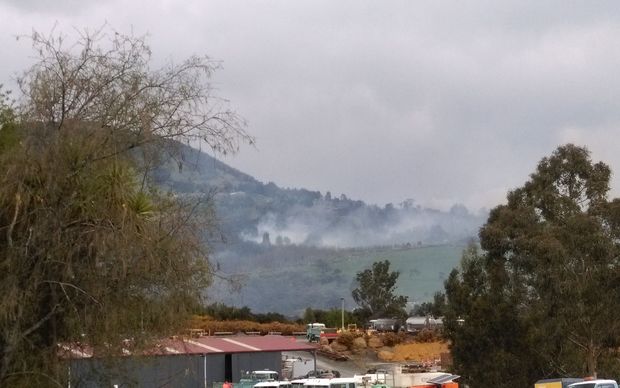 The Dunedin City Council said it had lost power to some of its water pumps due to the fire at Saddle Hill.

A council spokesperson said they did not know how long it would take for power to be restored.

As a precaution, the council was asking residents in the Kinmont and Braeside areas of Mosgiel to conserve water where possible. The spokesperson said, if it became necessary, the council would provide water tankers or other alternatives.

Evacuations after fire near Dunback

There were also evacuations in North Otago where another fire near Dunback, which broke out in the morning, has burned over 90 hectares.

The Fire Service said the fire near Dunback was originally burning across 30 hectares of scrub and tussock but spread as dry winds continued to fuel the flames.

Dunback resident Rob Moir said the smoke from the large fire on farmland there was so thick the day went to night in a moment.

Mr Moir, who runs the Dunback Inn, said the fire was covering about a kilometre and a half of farmland this morning.

He said the fire had crossed from one side of the road to the other, and the road was now blocked off. 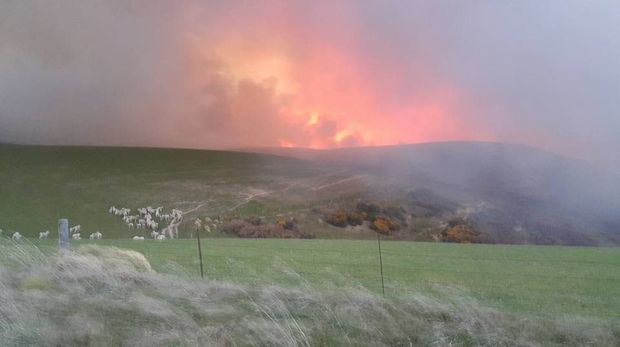 The fire at Dunback Photo: Supplied

The New Zealand Transport Agency reduced State Highway 85 to one lane near Dunback because of the fire.

The Fire Service has responded to at least 27 scrub fires in total in Canterbury and Otago as both regions experienced very high temperatures and hot, dry winds.

The winds had earlier created intense dust storms in mid-Canterbury, pushing driving visibility down to almost zero on State Highway 1 south of the Rakaia River.

A statement on the airport's website said weather conditions were causing the disruptions.

Some Otago residents have been told they should be prepared to be without power overnight because line crews are unable to reach the faults as the Fire Service has control over the area.

Outram and Allanton continued to be affected by interruptions to supply as repair work after Sunday's damage continued, but power had been restored to the majority of customers.

Berwick was also experiencing supply interruptions with 170 customers without power.

Crews were attending all faults but in some cases winds were so high that work had been suspended until it was safe to continue.

In Arrowtown, power had been restored to at least 400 customers in the area, as well as to customers in Roxburgh.