A blaze in a truck laden with gas cylinders led to the evacuation of businesses in Nelson.

Fire crews were called to Quarantine Road, near the city's airport, just after 6am. 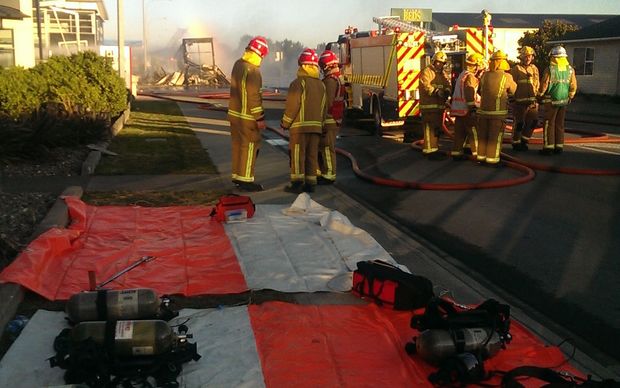 People were evacuated from the immediate area due to the intensity of the blaze. Photo: RNZ / Tracy Neal

The Fire Service said they had evacuated people from a 500-metre radius.

He disconnected the truck from the trailer and was able to drive away.

Mr Irving said the trailer was carting 69 cylinders containing of highly flammable oxyacetylene, LPG and oxygen, and there was concern the fire might affect the underground electrical feed to nearby Nelson Airport.

He said the gas cylinders had an automatic venting system to prevent them exploding but the danger remained until the fire was completely out.

Police asked nearby residents to stay indoors, particularly those downwind of the fire in the direction of Parkers Road.

Crowds gathering on Quarantine Road were kept at a distance from the burning trailer unit.

Mr Irving said the fire had been put out and burned cylinders would be removed once they're cooled.