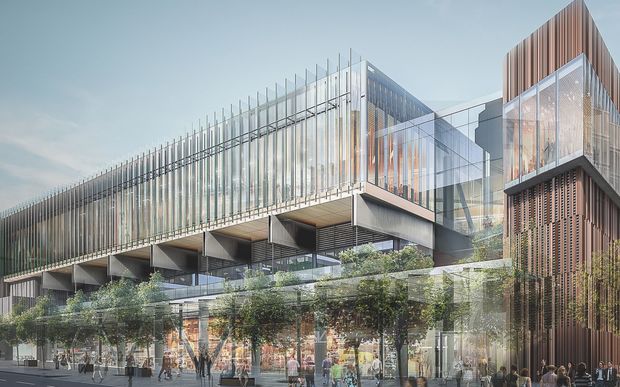 An artist's impression of the scaled down design agreed for Auckland's SkyCity convention centre. Photo: SUPPLIED

Independent commissioners made the decision regarding the NZ International Convention Centre (NZICC) for the Auckland Council, which was revealed a short time ago.

The consent is subject to conditions.

The approval allows Sky City to now seek changes, which were agreed with the Government in May, to the convention centre's design.

It also follows an independent board of commissioners' determination in July that the NZICC resource consent application should proceed on a non-notified basis.

SkyCity chief executive Nigel Morrison said the resource consent approval was "great news" and the company was looking forward to delivering a landmark facility for Auckland.

"We are working towards concluding a building works contract later this year, having already put months of work into the tender process and with strong interest from outstanding and experienced construction firms. Our objective is to turn the first sod of the New Zealand International Convention Centre before Christmas," says Mr Morrison.

The NZICC will be the largest purpose-built convention centre in New Zealand, capable of hosting conferences of 3,150 people, or two concurrent events of 1,200 delegates each.

The resource consent approval also allowed for the construction of a 5-star, 300-room hotel.

A preliminary design for the hotel has been completed and the company is currently exploring options with external investors for the development and future ownership of the hotel.

The Auckland Chamber of Commerce says plans to start building the centre before Christmas will kick off a building boom in the city centre.

He said the work will generate 10,000 more jobs in the city during the next five years.

Mr Barnett said the SkyCity project was estimated to boost tourism spending in Auckland by $90 million, with more than 100,000 extra visitor nights a year.