The number of women working in construction in Canterbury has more than doubled in the last two years, and women enrolling in trades training has increased 800 percent since 2011, a report shows.

Conducted by the Ministry for Women, the report, Getting it done: utilising women's skills in the workforce, shows businesses how to attract more women into trade jobs. 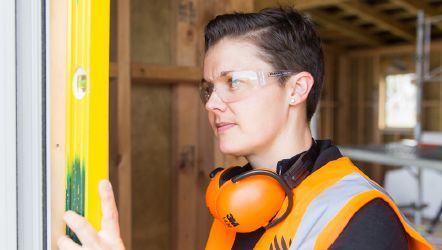 The number of women in trades in Canterbury has doubled in two years Photo: Supplied / Ministry for Women

Following the February 2011 earthquake, 3300 women were unemployed in the region despite general employment figures increasing.

At present women make up only 14 percent of New Zealand's construction industry workforce. In Canterbury there are 8600 women working in the industry - a jump from from 3600 two years ago.

Joy Lalahi was one of those who decided to make a change in her life three years ago and become an electrician.

Making the most of Christchurch Polytechnic Institute of Technology's fees-free trades training for females she was awarded top trade student in 2013.

"I really wanted to have a trade under my belt. I can see the benefits of having a practical skill.

"My dad was my inspiration, he was a handyman, he spent years of his life working in factories, but not having a qualification meant he could not move up in the workforce," she says.

Having two boys aged 13 and 9, making the decision to study was not an easy one for Ms Lalahi.

"I'm in my third year as an apprentice working at the University of Canterbury, an apprenticeship is not the best pay, but the benefits definitely outweigh the negatives.

"Finding time to study and be a mum at the same time is hard, but I want to give my boys the best possible life, and I know they are proud of me."

Ms Lalahi says there are stereotypes working in a male dominated industry but she enjoys the challenge it brings.

"I had a plumber say he needed help carrying a piece of sheet metal and when I offered to help he looked at me funny, I thought I could bench press him and lift the sheet metal at the same time!"

She said her focus was finishing her apprenticeship and becoming a registered electrician.

Christchurch Polytechnic Institute of Technology' has more than 400 women studying trades this year compared with only 50 in 2011.

The increase came after the polytechnic started offering fee-free trades training for women in 2014.

Diane Craig worked as a painter for 30 years before becoming a trainer at Building and Construction Industry Training Organisation (BCITO).

She is following 37 students through their painting apprenticeships, seven of whom are women.

"When I started I was the only female on the job, it was a really good learning experience I didn't have any barriers you just have to allow yourself to fit in.

"I found most of the boys are just as weak as, and just as afraid of heights as women."

Ms Craig said her female trainees are very confident and don't seem fazed about being in a male-dominated industry.

"There are stereotypes being a woman in a trade, just like with any job, most people just ignore it."

Minister for women Louise Upston says women in hard hats and high-vis is no longer a novelty in Christchurch.

Ms Upston said the report gave business steps about how to best attract women to trade jobs and how to accommodate them in the workforce.

"With the high demand for skilled workers in Canterbury forecast to continue some businesses are continuing to have difficulty attracting skilled workers to fill jobs, employers need to consider women, their talents in the labour market are under-utilised."