Sharply rising patronage on Auckland's commuter rail system could prompt a re-think on when the city needs to buy additional trains.

Auckland Transport said if growth did not slow markedly in a couple of years, it might have to add to its new fleet of 57 electric trains, which cost around $500 million. 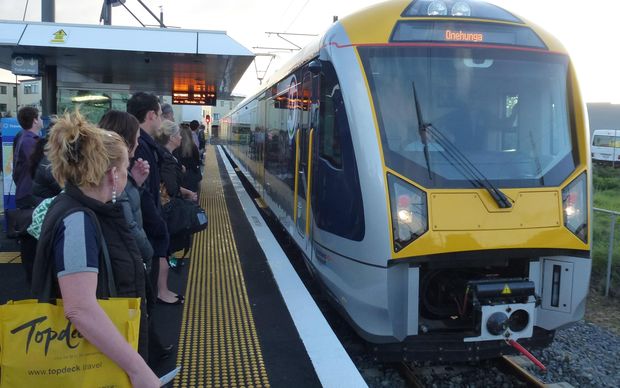 The number of rail passengers in Auckland has passed 14 million a year and is rising by 21 percent annually.

Auckland Transport expects that growth to be handled by its new, bigger and faster electric trains, the last of which are being commissioned now. Last year it deferred plans to add 24 new trains within a decade, at a cost of $336 million.

AT Metro general manager Mark Lambert said if the slowdown in growth did not fall to near the 5 percent forecast in 2017/18, the agency would consider options.

"If there's crowding and either we can't afford to, or there's a long lead-in time for additional trains, an option could be, for example, to reduce fares either side of the really congested peak period to encourage people to take the less patronised services", said Mr Lambert.

Mr Lambert said it was too soon to consider whether occasional crowding during the peak was a problem, as additional trains were still to be added, and teething troubles with new technology can disrupt travel patterns.

The agency's decision-making is locked into forecasts made by a planning model agreed with the Government, called APT3, which would share the cost of any extra trains.

It said so far, the growth was in line with APT3, and if the existing fleet could cope until the opening of the City Rail Link in the early-mid 2020s, that downtown loop would boost the capacity of the rail network by allowing trains to circulate more frequently.