The board of inquiry into the $600 million Ruataniwha Water Storage Scheme in Hawke's Bay has confirmed strict limits on the amount of nitrogen that can leach into waterways from farming. 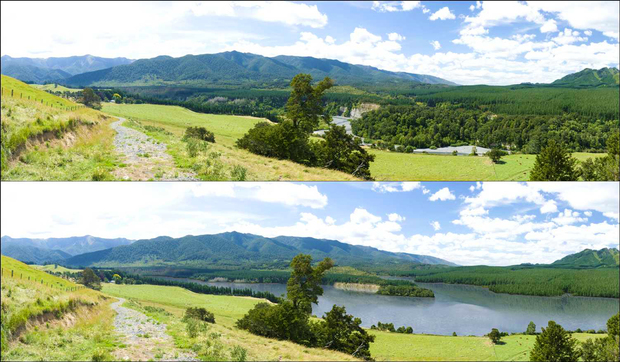 An artist's impression of the proposed Ruataniwha Dam (before and after) Photo: Isthmus Group

After more than a year of hearings, deliberations and a High Court challenge, the Tukituki Catchment Proposal Board of Inquiry released its final decision this afternoon.

It had earlier set a Dissolved Inorganic Nitrogen (DIN) limit of 0.8 mg/l in waterways in the catchment, which must be monitored each year.

A map provided in the board's final report shows, in large parts of the catchment, the nitrogen limit had already been exceeded - in some cases, to twice the target.

The consents the board has issued require the Hawke's Bay Regional Council, which is developing the dam through its investment company HBRIC, to met the 0.8 mg/l target by 2030.

Submitters have 15 working days to appeal against the board's final decision.

The Environmental Defence Society (EDS) said it was hard to see how the water storage project would be financially viable following the board's decision.

EDS chairman Gary Taylor said he was pleased the board had confirmed strict nitrogen limits.

He said, with a large part of the catchment already over the nitrogen target, the Hawke's Bay Regional Council would have to demonstrate it was bringing those levels down by 2030.

Mr Taylor said that meant it would be hard to justify the dam as the intensification of farming that would come from it would create much more nitrogen pollution, not less.

"In the end it comes down to whether individual farmers are prepared to put their personal dollars on the line for something as speculative and uncertain as the dam." 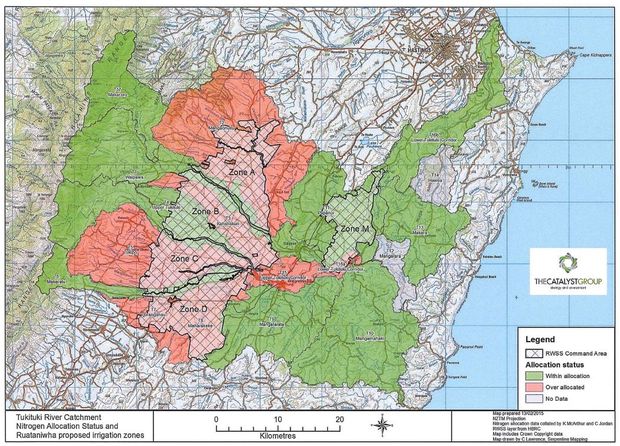 A map used as part of the board of inquiry's proceedings shows the areas (in red) that currently exceed resource consents for nitrate leaching. Photo: SUPPLIED

HBRIC chairman Andy Pearce said it was pleased to be at the end of the board of inquiry's decision process, which he said had been extremely long and involved.

The investment company acknowledged the board's effort in resolving "what is a challenging and complex set of issues", he said.

"The board has ensured all parties have had the opportunity to provide input at every step along the process and has taken into account all the competing points of view."

He said HBRIC was confident the consents were workable and it could now commit fully to the investment, water uptake and development, with confirmed consenting obligations.

"HBRIC Ltd is keen to see the Ruataniwha Water Storage Scheme play its part in achieving what the board envisages in its decision, including smart irrigation, innovation on farm and an ongoing commitment to best farm environmental management practices."