A revamped lookout featuring a palisade-like ramp is to be built at the summit of Parihaka in Whangarei.

Home to one of New Zealand's largest pa complexes, Parihaka is already the location of a war memorial and holds special significance to Maori and pakeha in Whangarei. 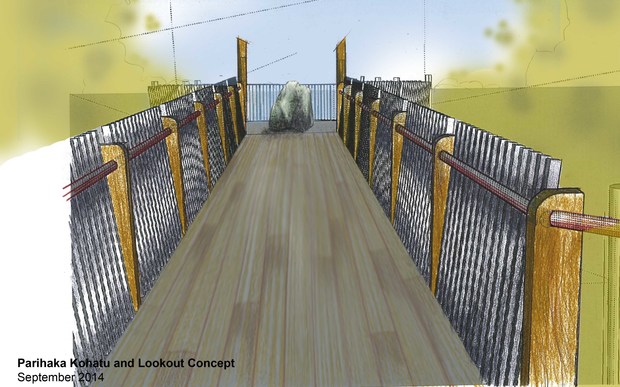 An artist's impression of the new lookout. Photo: Supplied

Whangarei District Council's senior landscape architect, Bruno Gilmour, said the city had worked with hapu associated with Parihaka to find a design worthy of the site.

"This is an important place, but the old lookout hasn't reflected that in a way that respects its mana. By working with the district's hapu, we have achieved a design that will include a special carved kohatu (rock), which will inspire a sense of gravity and significance to the lookout," Mr Gilmoure said.

As well as the kohatu, which will be installed once the $218,000 lookout has been completed, panels will explain the historical significance of the area, and a panorama will identify the landmarks visible from the platform.

"This lookout will do justice to this historic place overlooking the city and many of the district's landmarks," Mr Gilmour said.

The project also aims to reclaim the original name for the site.

"It's also about bringing the correct name back for the site which is Parihaka.

"It's been known as Parahaki, and so the way we are doing that is to make it more of a cultural landscape through the presence of the kohatu, which is locally sourced," Mr Gilmour said.

"It will be apparent, through this slightly enigmatic object, that there is more going on here than just looking at the views from the platform."

Over the next month, fences will be errected around the existing lookout, before the old structure is removed from its foundations and airlifted away.

Over the winter, the new structure will be built on the western side of the original footprint. When it is finished, a much larger, hexagonal platform will extend out over the bush.

Mr Gilmour said more would be revealed about the kohatu once it had been unveiled.

"We need to do things respectfully and in the right order," he said.

Public access to the existing war memorial will not be affected by the work, but some tracks will not be able to exit near the lookout for a while. Signs will be erected to inform runners and walkers.

The new lookout is due to open to the public in the spring.