A billboard claiming a new irrigation scheme in Canterbury will pollute groundwater has been erected in Christchurch. 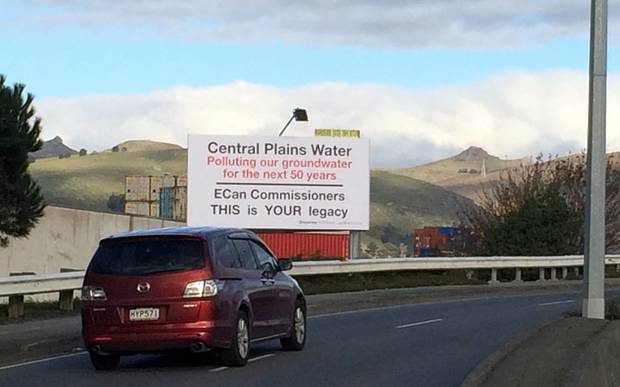 It was funded by Angus Robson, who calls himself a water quality activist.

The Central Plains Water irrigation scheme would irrigate 60,000 hectares of the Canterbury plains, between the Waimakariri and Rakaia rivers.

It would use water from the rivers, with water from Lake Coleridge as back-up.

Mr Robson said the scheme would lead to more dairy farming and there was already evidence of dairy cows' urine polluting the region's groundwater, which was used for drinking water.

"Society expects policy to be driven by the precautionary principal, which means you don't do something if you know it's going to harm a lot of people, or a lot of value, until you know how to control it, and we don't know how to control this at the moment. But we went ahead anyway," said Mr Robson.

He said many Canterbury residents would like dairy conversions stopped until it was known how to manage the urine pollution from existing farms.

But Central Plains Water chair Doug Catherwood said pollution would decrease as a result of its scheme, as the aquifers would be recharged and the urine pollution diluted.

"The alpine water that we intend to use will enable some of the ground water users to switch of their extraction from deep wells. That, in turn, will enbale the aquifers to increase their flows and this is what will be part of the solution to the supposed degradation of our groundwater."