The auction is nigh. And instead of prowling round other people's open homes, at the weekend I go stake out my own.

I loiter in the car around the corner. The day is fine, the sky clear, and my agent is a lonely man.

He paces a bit, puts out a couple of signs. Shuffles some glossy flyers. A solitary figure.

I lay my head on the steering wheel and close my eyes. Little dots of despondency play behind my eyelids. I feel the texture of the steering wheel imprint itself on my cheek. When I open my eyes again, there is still no-one there.

Clearly this is not good. 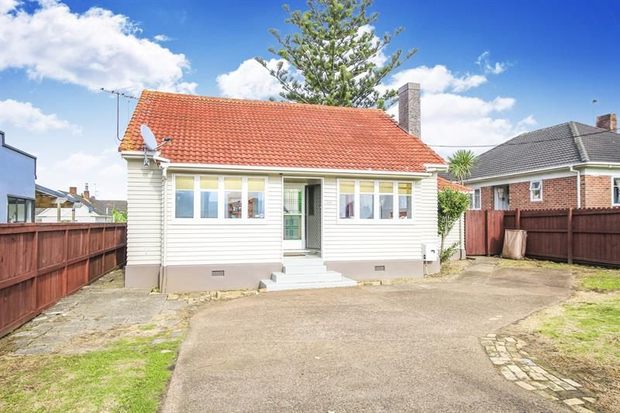 I have found myself becoming a bit of a magnet for other people's house selling/buying horror stories. I know someone who was planning to sell in Te Atatu, and go mortgage-free in a house out at Piha. Her house didn't sell, her life didn't un-complicate itself. Two others share their auction failures. Both explain that, yes, it is possible to have not a single bidder.

Before the end of the open home a black Corvette pulls up on the grass verge, leaving luxury car tyre ruts in the grass. A lanky man in jeans springs out and bounds up the stairs to the front door.

I don't for a second think that a guy who owns a Corvette wants to live in my little former state house in Otahuhu. I do hope he might cavort around the big empty back section forming cunning plans for use of the land. He can cut up my verge any day.

The day before auction, I have a family group conference with the agent. Interest in the house hasn't been great. We talk about setting a realistic reserve price. One that won't startle the horses, but will lure people in to take part.

It's a fine psychological game, this auction thing: Would-be buyers pretend they are rational beings who will in fact get a cheap house in Auckland, and sellers hope a gaggle of rich and misguided individuals turn up and compete to throw money away. Both ideas are delusional. 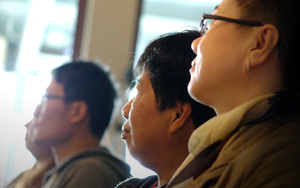 I wonder about my own delusions. I have been behaving slightly out of character lately.

I turn up at open homes and look up, as some spy movie once suggested. I check the things you don't normally think about. Where is the fuse box, what's the wiring like, and what is happening with the spouting? At one home, I see I will need to work on the roof. It is missing a great big length of guttering. There you go. Gutter journalism. I have reached a professional nadir.

I am feeling pretty resigned to not breaking out the champagne on Tuesday.

I wake up stupidly early, even for me. Thank god I have a Jack Russell Terrier. She takes me for a long walk.

I am quite distracted: I think it is Monday, only shave one leg, and step on the neighbour's cat inadvertently as I head for the car.

I drive around doing domestic things to take up some of the time that yawns before the auction, and I think again about how weird they actually are. You set a reasonable reserve price, then just hope people turn up and go wild.

It's like gambling. The big difference is that if I wandered into a casino and blew tens of thousands of dollars, I would realise I had a problem and get help. But here I am preparing to put that much money on the line hoping luck goes my way. Where's the Auctions Anonymous meeting when you need it?

I stop at a local bakery, and there's an older guy sitting outside, begging. He's dirty and weighed down by poverty or mental illness or addiction or homelessness or maybe be all of those things. I give him all the change I have, and he gives me back something far more valuable - a bit of perspective.

Calmer, I head for the auction venue, and find the whole thing's already gone to the dogs. Literally. It's being held at the Auckland Greyhound Racing Club premises, above the track. On the upside, there's a really big crowd. There are about 30 homes going under the hammer, and mine is lot 27. It's not up until after 2pm, so I have time to kill.

I also have a capable assistant with me, primarily to take photographs. My editor says this will help capture the "emotional arc". I was a little taken aback by this idea. I contemplated what my "emotional arc" might involve. I generally tend to inhabit a continuum that ranges from mildly grumpy to slightly livid. Is this an emotional arc? I think not. I tell my editor he is giving me perhaps too much credit on the arc front. He thinks I am joking. Ha. 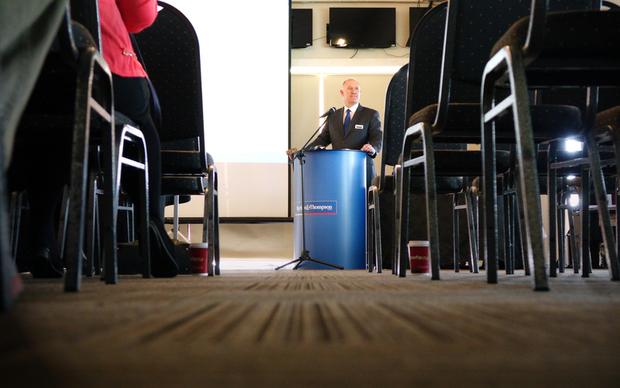 David Johnstone from Barfoot & Thompson at the helm of the auction. Photo: RNZ / Kim Baker Wilson

The mass auction is in a long room, active participants up the front partially screened off from those waiting around tables further back. I stay out on the fringes of the action, and pace a lot, keeping a vague eye on the properties as the auctioneer slowly goes through them.

Some sell, some don't meet reserve. Some get a lot of bids, some are drawn out by lots of haggling, with the auction manager racing around between the seller and the potential buyer, encouraging both sides with hurried whispers, actively trying to get bids up to reserve and beyond. There are a few men on phones to long distance interests, and some very self-contained looking people with folded arms and sharp eyes who bid and then turn their backs when the price rises.

My auction is running late. My partner is joining in via Skype and cellphone. She's out of town on work duties, in Stratford - alas not -upon-Avon but in Taranaki. I think she's more nervous than I am, as she's by herself in a motel in the middle of nowhere doing a bit of digital waiting, not quite seeing what's going on. I get to have a chat to our agent, who's been working the room. I am introduced to the auction manager. I have distractions.

But lot 27 feels like it is taking forever to come around. And in the meantime, the venue's emptying out - much as any optimism I may have had left departs. My agent says auctions are psychological warfare, but I'm finding this more like water torture. It is wearing me, slowly but surely, down. 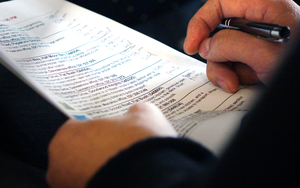 Then, all of a sudden, lot 26 is up, and amazingly it's done in a flash. I teleport into the active seats up the front and we're off!

The Auctioneer launches in, hammer waving with a little flourish. And to my astonishment there are actually two bidders: a quiet woman who's mysteriously just appeared, and a group of four men who've been keeping a close eye on things all afternoon. Bids have started pretty low and slow, but they careen up, and my adrenaline perks up too. Then, just as suddenly, things come to a standstill.

The auction manager's over with the group of four, and then over to me whispering that the guys haven't even seen the property, but will I accept their (under reserve) offer. I have a quick-whispered conversation on my cellphone, and that's a big 'no'. I look round and the fleet-fleet-of-foot manager is back with the guys, then in my ear again. It's a higher offer and nearly there but not quite. My answer is still 'no'.

A thunk from the hammer, and that's it. Completed in about five blurry minutes, the property is passed out. 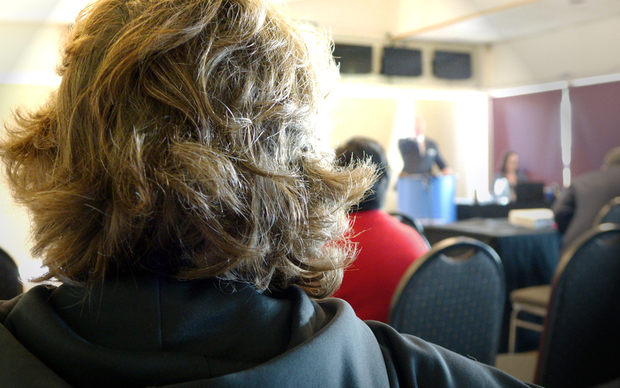 Eileen watches on as her house goes under the hammer. Photo: RNZ / Kim Baker Wilson

I too feel slightly under-reserve and passed out by this stage. I stand up and wander out the back to my capable assistant who is possibly thinking he could send me wherever they send old greyhounds. Strangely, I start to perk up a bit, and he's surprised that I am actually smiling. It's that feeling you get when something unpleasant ends and you realize normal life is actually very nice. It is over, I think. Thank God for that.

But no, like purgatory, selling property apparently never ends, and my agent comes up and says 'Let's set a fixed price, and start pushing it out there'. The group of four are going to pop round and check out the house.

During the evening I spend some quality time with the agent as he ferries a contract with slowly rising offers between me and the would-be buyer. It's the middle of an electrical storm, and still he is very patient, and very kind. My dog likes him. But the negotiation doesn't quite make it.

So now I am more slowly selling a house, and more slowly looking for a new one, as winter sets in and the properties get scarcer while the prices just keep going up. Let's just hope I haven't got myself caught in that property purgatory I've so casually referred to, shall we?