More than 100 people will lose their jobs at Solid Energy's Stockton Mine, in Buller, the State-owned company has announced.

Staff were told the news at a meeting called by the company in Westport this afternoon.

Mine worker Skip Kiwi said today's announcement was not as bad as he expected it to be.

Mr Kiwi has worked at the Stockton mine on the West Coast for seven years and said while the mood after Solid Energy's announcement this afternoon was low, workers were also relieved the mine isn't being placed into care and maintenance.

"I guess that's what they need to do for the survival of the company, we can't really do much."

He said the general feeling was "pretty low" amongst workers.

Solid Energy chief executive Dan Clifford said the number of jobs at the mine would go from 397 to 246. However, 38 roles were already vacant so the total number of redundancies would be 113.

Solid Energy said the proposed changes were necessary to stem Stockton's losses which had averaged $2.1 million a month this financial year.

Last year 184 staff were laid off from the financially troubled mine - about a third of its workforce.

But in March this year Mr Clifford told a select committee further job losses were inevitable because of low coal prices and the need to reduce production.

The changes announced today were necessary to stem Stockton's losses, which had averaged $2.1 million a month this financial year and which, without change, were forecast to worsen, Mr Clifford said.

The price paid for coking coal had continued to fall since mid-2014, when Solid Energy last made changes at the mine, he said. At that time, the benchmark price was $US120 a tonne; the current spot market - an indicator of future benchmark pricing - was at $US83 a tonne.

"Through our regular face-to-face meetings with the teams at Stockton, staff members have had a good understanding from the last restructure that another change would be needed if the market hadn't started to recover by now," he said.

"After the efforts that have been made at Stockton to find more efficiencies, this news will not be welcome, but in this market we simply have to pare back the operation to a size that minimises those losses while still allowing us to maintain relevance in the international market."

Mr Clifford said the mine's future would depend on international coal prices and they had a minimum price they could operate at, but would not reveal what that was.

He said hopefully it would hold for 12 to 18 months but it could fall sooner.

Buller District Mayor Garry Howard said it was good the company did not make that decision today.

But he said there would not be other jobs for those made redundant and the region has to face reality.

Mr Howard says businesses are worried about the flow on effect on service industries if the population takes a sudden dive.

Organiser for the Engineering, Printing and Manufacturing Union Garth Elliot said Solid Energy had cut nearly 900 jobs at its operations at Stockton, Spring Creek and Huntly East since 2011.

Before this afternoon's meeting he said another round of bad news was expected in what he called shabby treatment from both Solid Energy and the Government.

Staff would have time to consider and provide feedback to today's proposal, with a final decision expected on 26 May.

Prices were now less than a third what they were in 2011, partly because of the shale revolution led by the United States.

New technologies such as fracking and horizontal drilling were being used to unleash oil and natural gas in huge quantities at cheap prices, displacing coal.

Unsold coal then piles up in world markets, making it hard for New Zealand producers to compete.

The resources lobby group Straterra said there was another reason for falling coal demand: China has greatly over-invested in infrastructure that was now under-utilised. 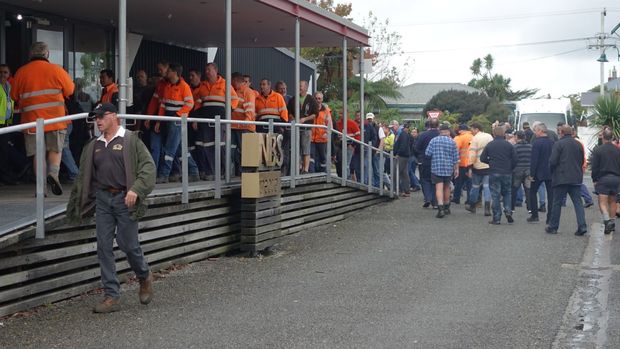