The Transport Agency has confirmed the Manawatu Gorge will stay closed for at least two weeks after a slip. 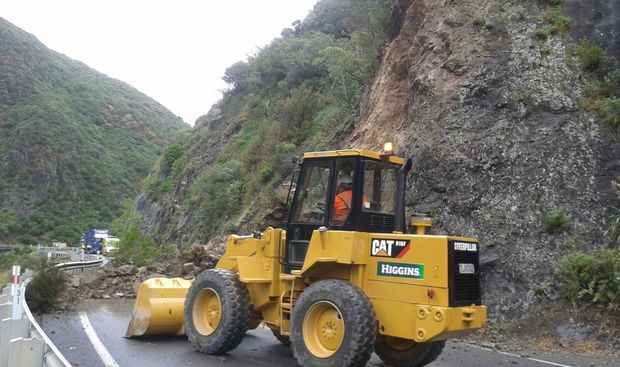 The slip on the Manawatu Gorge Photo: Supplied / NZTA

The road was closed yesterday following a rock fall, affecting State Highway 3 between Ashhurst and Woodville.

Traffic is being diverted over the Saddle Road.

A New Zealand Transport Agency geotechnical engineer assessed the slip site and discovered tension cracks in the solid rockface above where the slip has come down.

The agency said the engineer's advice was that these cracks rendered this rockface unstable, and the site is prone to further rockfalls, and therefore unsafe.

The amount of debris which came down in the slip was not large, and could be cleared in a matter of hours, but the unstable state of the rockface above the slip site meant the road cannot be re-opened to motorists for safety reasons.

Specialised equipment would be required to remove the unstable rock and was likely to involve the use of compressed air machines. This equipment will be sourced at the weekend and work was to begin on Monday.

The work is expected to take about two weeks to complete.

The Transport Agency's regional performance manager Mark Owen said he understood the latest closure was frustrating but it was putting a lot of work into making both the gorge and the alternative routes more resilient.