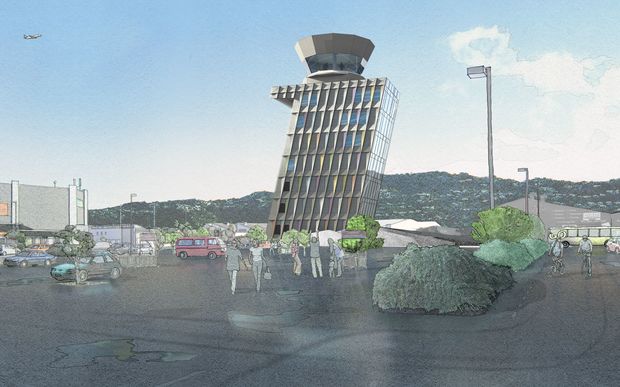 The tower is designed to sit at a 12.5 degree angle - an angle greater than the Leaning Tower of Pisa. Photo: SUPPLED

The nine-storey tower is planned for the southern end of the airport near Lyall Bay, at a cost of $18 million.

The Airways New Zealand-proposed tower has been designed to lean into the prevailing northerly wind at an angle of 12. 5 degrees.

At that angle, the tower would have a greater tilt than Italy's Leaning Tower of Pisa.

The New Zealand Airline Pilots Association (NZALPA) said it supported investing substantial money into the tower but wanted to be included in the consultation process.

NZALPA Air Traffic Control Director Jon Brooks said there were aircraft conflict hot spots around the airfield, and the proposed change of location for the new tower meant controllers would probably not be able to see some areas by direct sight.

Airways New Zealand chief operating officer Pauline Lamb said the design and site selection for the tower had been through a full safety risk assessment.

The new tower will replace the 58-year old-current building.