A Northland group campaigning to seal dusty and dangerous forestry roads has been told to back off until after the by-election. 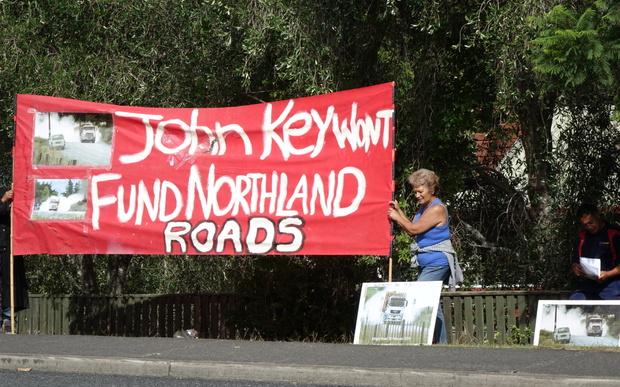 Members of the Pipiwai-Titoki rural roads advocacy group outside Northland Polytechnic in Kerikeri, during a speech by Prime Minister John Key. Photo: SUPPLIED

Whangarei dairy farmer Alex Wright said Whangarei National MP Shane Reti rang her last week and told her the Pipiwai advocacy group should keep quiet for the next two and a half weeks - or risk getting nothing. 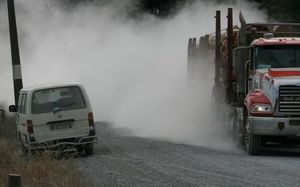 In the call, which she recorded, Dr Reti said he had been working behind the scenes to help the group, but warned her that could be jeopardised if the group continued to agitate and send what he called threatening emails to MPs.

But Dr Reti said he was trying to help the group - not bully them.

He said he was responding to a threat by members of the group to blockade the road, and advised them such tactics could jeopardise their chances.

Dr Reti said he had been working to help the group for some time, behind the scenes, and his warning was not linked specifically to the by-election.

"It just happens that the spotlight's on us at the moment, that's just the consequence of where we are," he said.

Ms Wright said members of the Northland dusty roads action group had been protesting peacefully at appearances by the Prime Minister and National MPs during the by-election campaign and would continue to do so.

Prime Minister John Key said he had given no orders to MPs to keep roads protestors quiet during the Northland by-election campaign.

Mr Key said he would be concerned if that were happening.

"Well I mean I don't believe it is. I've certainly never given any instructions, I have never heard anyone who has.

"I'd just need to listen to the whole conversation, the whole transcript, before I would want to comment."

Mr Peters, who is contesting the Northland seat, said National had consistently ignored the plight of people living on dusty log-truck routes and, now they were getting coverage at by election protests, it wanted to muzzle them.

"And all of a sudden you've got these threats that you know, if you don't keep quiet, then you can't expect any help from us now.

"It's a democracy, and people are entitled to demand legitimate servicing of infrastructure they have paid taxes for for all these years."

Mr Peters said rather than bullying the dusty roads lobby, National should build a bridge - and get over it.