The American driver of a car involved in a crash that killed three people, including his wife, has pleaded guilty to careless driving causing death. 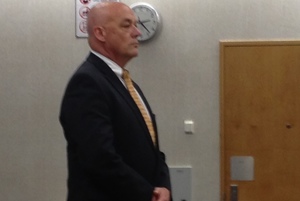 Husband and wife Mitchell and Ruth-Ann Peterson, and Tamara Barnett, died when their car, being driven by Richard Barnett, turned into the path of an oncoming truck and trailer unit at Templeview in Waikato on Wednesday night.

Judge David Ruth fined him $3000 and ordered him to pay reparation to the truck driver of $1500. He was also disqualified from driving for 12 months.

Dr Barnett was told of the charges in a prearranged meeting with the police and his lawyer in hospital last evening.

Lawyer Thomas Sutcliffe said it was hoped that the court process could be expedited to allow Dr Barnett to return home as soon as possible with his wife's body and those of Mr and Mrs Peterson.

Dr Barnett's eldest son will arrive in New Zealand this afternoon and his brother-in-law will arrive tomorrow to help return the bodies to Utah.