Wellington students say a surge in their numbers has driven up rent costs and left many fearing homelessness. 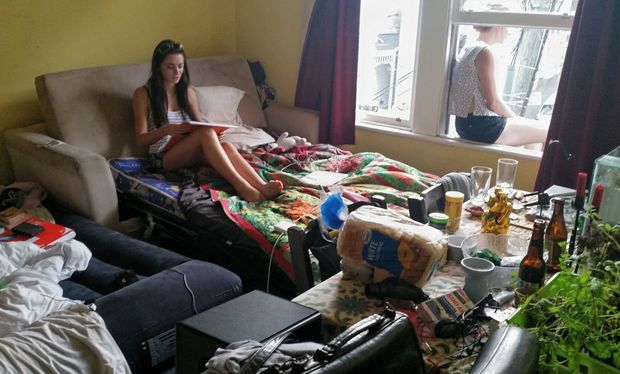 Some Wellington students have been forced to stay in friends' lounges. Photo: RNZ / Alex Ashton

Student unions have expressed worries that some students may have to give up their degrees and move back home.

Rose Stuart and Georgia Cattley came back to the capital for their third year at Victoria University, but without a flat to go to have found themselves crashing in a friend's lounge.

Georgia said there were too many students in Wellington for the number of flats available.

"We're set up in the living room with a fold up couch into a double bed, a blow up double bed... There's nowhere to sit."

"We had flatting experience, we had references, but even then there were too many people looking for places already."

According to Rose, viewing times were packed events.

"We were looking at three bedroom places, and there normally would be about 10 to 15 different groups."

She said a friend had posted an available room online and received 40 enquiries in an hour. 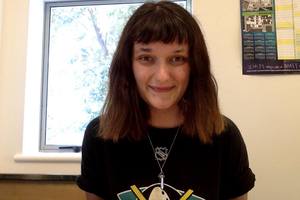 She said substandard flats and rising rents - up 9% on average over the past year - made it hard to find a home for the $173 a week they could borrow from the government.

And she said some landlords were making the most of the tight market.

"There's this bizarre new culture which is really concerning to us, of landlords taking that as an opportunity to create their own auction for the amount of rent they're going to be receiving for the house over the year."

"They're getting so many students turning up that they can whisper in the ear of some groups asking them for $30 or $40 more a week."

Massey University's Student Union President, Tom Pringle, said he too was hearing from many homeless students.

He said making matters worse was Massey having only one residential hall set aside for first years.

Mr Pringle said not having their own place could mean some students eventually called time on their studies.

"You can't sleep on a mate's couch for the whole year.

"That impacts on your study, and then impacts your whole well-being. If you want to get your degree done and you can't find a place, it's kind of hard."

Victoria University's Director of Campus Services Jenny Bentley said the university had tripled its student accommodation over the last 20 years to about 3000 beds.

She said the New Year flat crunch seemed to be an annual occurrence.

"We see it pretty much as just being a time of peak demand, and we expect the market to cope with that demand.

"We will be keeping a close eye on it as we go through 2015 and that may certainly mean the university has to look more closely at its own provisions."

She said that could mean building more accommodation, or partnering up with private investors.

Rose and Georgia have now secured a place to move into in a few weeks time, but they said there were plenty more out there who had not been so lucky.