Whanganui iwi held a series of events over the weekend to commemorate the 20th anniversary of the occupation of Moutoa Gardens in the city centre, which divided the nation. 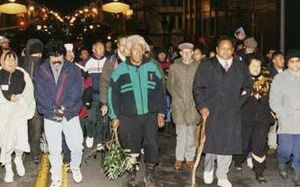 Pakaitore Whanau walking from Moutoa Gardens at the end of the 79 day occupation. Photo: Raukotahi Whanganui

One of the protest leaders Dame Tariana Turia said they hoped Pakeha would come to Moutoa Gardens to talk to Maori about long-standing grievances and gain an understanding of why they were taking action.

She said some Paheka made an effort but most did not and were fearful of the protest, which was triggered by the decision of the National government to put a financial cap on all future Treaty settlements.

"I think the biggest shock for our people was the racism, I don't think that ever expected it.

"They'd grown up with many people in this town, they'd gone to school with them. So that was hard"

The occupation of the gardens in 1995 lasted for 79 days.