The Grey District mayor Tony Kokshoorn has spoken out against yesterday's assault of a tourist after he was pulled over for bad driving, but says action is needed to keep the roads safe. 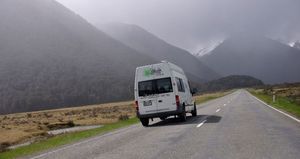 The incident happened near Greymouth and allegedly involved the tourist being punched in the face and having his keys broken.

The police are still looking for the man they say carried out the assault, and are warning the public against taking matters into their own hands.

Mr Kokshoorn said this summer alone he had witnessed tourists driving on the wrong side of the road three times, but resorting to violence to try to fix the problem was unacceptable.

"Well there's a real concern about tourists driving on the wrong side of the road, especially here on the West Coast, it's extremely busy with tourism at the moment.

"But there's no excuse for hitting someone. It's totally unacceptable."

Mr Kokshoorn has written to the prime minister asking for increased education of tourists about the country's road code.

A woman who helped pull over a tourist driving dangerously has also condemned the assault on a tourist pulled over for the same reason.

Christine Wardell, who removed the car keys from a tourist driving on the wrong side of the road in December, said assaulting somebody was not acceptable.

But she said people should not stand by and do nothing if they see dangerous driving.

"You see it happening in front of your eyes, and when they're going to kill you or somebody else it's not very pleasant. But there's ways of dealing with things, isn't there," she said.