A German tourist who ran a stop sign in Christchurch has pleaded guilty to causing the death of a Canterbury woman. 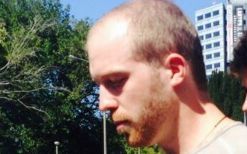 Daniel Muller, 26, failed to stop at the intersection of Goulds Road and Leeston Road on Monday.

He crashed into another car, killing the driver, Stephanie Anne Ellis, who was 54.

His lawyer told, Judge Gary MacAskill, his client, who has been in the country since December, has already booked his flights home on 26 March.

Daniel Muller will be sentenced on 10 May.