A woman has attempted to spraypaint a controversial t-shirt at an exhibition at Canterbury Museum. 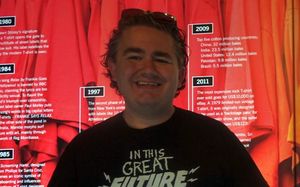 The exhibition - 'T-shirts Unfolding' - has drawn criticism for a t-shirt from the British heavy metal band Cradle of Filth.

It has a graphic sexual image of a nun on the front and offensive language to describe Jesus Christ on the back.

Museum director Anthony Wright said a woman was asked to leave the exhibition this morning after she sprayed black paint onto a perspex barrier.

Mr Wright said no damage was caused to the exhibit and the paint had since been cleaned up.

He would not answer whether the police were called.