A fire burning in Arthur's Pass is not expected to be under control until tomorrow evening at the earliest and could take another two to three days to fully put out. 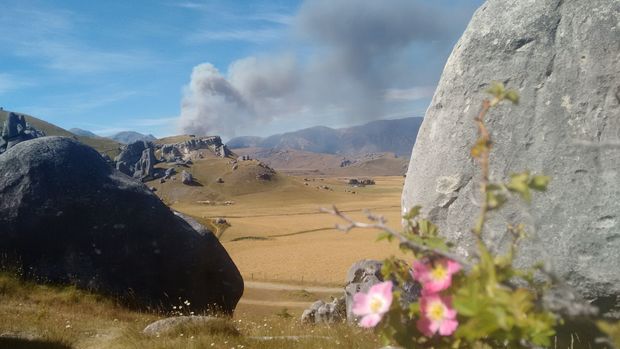 The blaze started in Flock Hill station in the Craigieburn Forest Park, shortly after 2.30 this afternoon.

Department of Conservation (DOC) technical fire officer Bruce Janes said flames were up to 20 metres high and conditions were too volatile and dangerous for ground crews to directly fight the fire.

Six helicopters and two fixed-wing aircraft had been fighting the 100 hectare blaze but had now been suspended due to nightfall.

Hot and windy conditions were fanning the flames, which stretched along the roadside.

Sheep were moved to safety and the Fire Service was dipping monsoon buckets in nearby Lake Pearson to help extinguish the fire.

However, the blaze was intensifying, he said.

"With the long dry period that we've had ... trees, logs are all available and will burn for a long time.

"The moisture in the soil is very low, so roots will burn as well."

She said the blaze was about 1km away from her, and the surrounding fields were tinder dry. However, the wind was blowing the flames away from the lodge.

Also this afternoon, firefighters have been called back to several of the scenes of a string of 21 fires which broke out along railway lines in Otago on Saturday.

The fires started along 12km of track south of Oamaru after a steam train passed through.

All the sites where the earlier fires broke out were continuing to be monitored.

Meanwhile, the Fire Service has ramped up its call out response, with parts of the South Island the driest they have been in a decade.

Canterbury and Otago have had total fire bans since early January, while other parts of the country - including the central North Island and parts of Northland - are also on high alert.

A total fire ban came into force in the Tararua District today, with a total ban imposed for all Rangitikei, Manawatu and Horowhenua beaches on Friday.

Acting National Rural Fire Officer Gary Lockyer said there was no reprieve in sight, and extra fire crews were being sent out to callouts in areas considered to be hot spots.

"Right now in those really hot-spot areas, we'll be responding with three or for times the normal response at the initial attack as well as dispatching aircraft immediately as well," Mr Lockyer said.