The victims of a microlight aircraft crash near Timaru have been named.

They were the flight instructor, Jack Mehlhopt, 86, and Randel Tikitiki, 51, who was a senior sergeant with the police in Timaru.

They crashed soon after take-off from Timaru at 7.30pm yesterday in a farm paddock just north of the town.

It is not yet known what caused the crash. 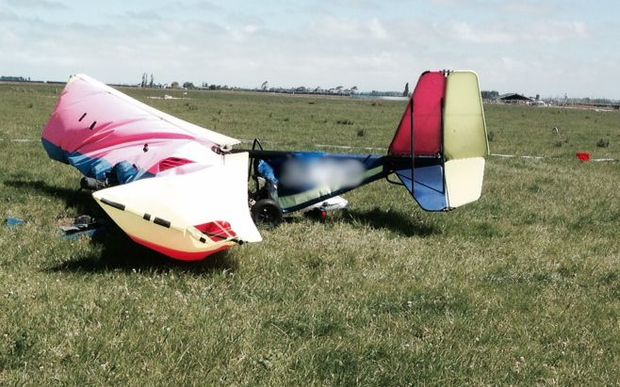 The wreckage of the microlight near Seadown, Timaru. Photo: Supplied

Civil Aviation Authority investigators are due at the scene this afternoon.

In a statement, District Commander, superintendent Gary Knowles, said the tragic incident has not just rocked the Timaru community but everybody in the Canterbury police.

He said senior sergeant Tikitiki served in the police for 28 years and his passion and professionalism will be sadly missed.

A statement from his family said the father of twin girls enjoyed spending time with them in the amazing countryside in mid-south Canterbury and was an avid fisherman.

A statement from Mr Mehlhopt's family said he was a loving father, uncle, grandfather and great-grandfather.

It says he was an experienced aviator having held a pilot's licence since he was 16.

Emergency services called to a rural property at Seadown, ten minutes north of Timaru, about 7.30pm.

The Civil Aviation Authority said it could take months to establish why the microlight crashed.

Investigators will talk to any eyewitnesses and examine the wreckage and parts might be sent to the manufacturer for testing.

If the crash was found to be due to mechanical issues, then advice would be issued to pilots.

There have been six microlight crashes in New Zealand in the past year.