Aucklanders opposed to the chopping down of six 80-year-old pohutukawa to make way for a road extension say they've been ignored in the decision-making process. 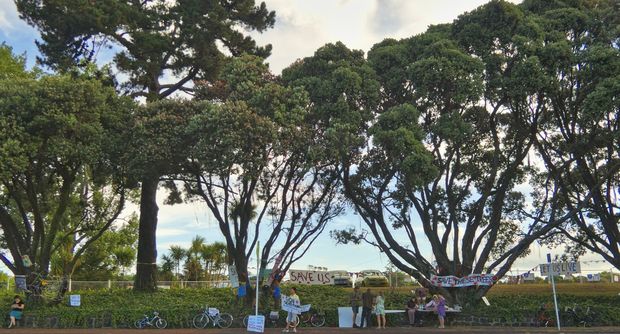 Pōhutukawa Savers protest in front of the threatened pōhutukawa trees opposite the Museum of Transport and Technology in Western Springs. Photo: @ByTheMotorway

But about 60 Western Springs locals turned up at the Auckland Transport community update meeting last night to say the trees should not be sacrificed for traffic.

MP for the area David Shearer said dissent was widespread.

"I have hardly met anybody, if anybody, who have said 'yes, let's cut the trees down', everybody wants to keep them...they love them because they are part of Western Springs, it's a break between huge areas of tarmac," he said.

At the meeting were some ardent critics, one being Patrick Reynolds, who writes for the Transport Blog.

Mr Reynolds said he intended to stop Auckland Transport from making a decision based on a computer model's prediction of traffic flow in about 10 years' time. 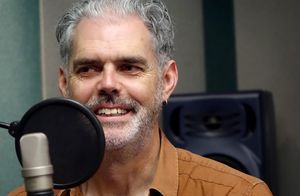 "I suspect that everything else, including beauty, glory, shade, history, everything, is considered to be a nice-to-have, and must be subjugated to this possible traffic flow that their computer tells them full of models based on their assumptions," said Mr Reynolds.

Spokesperson for the group Pohutukawa Savers Christine Rose said the group was prepared to fight all the way to court if needs be.

"Where that ends up is in the Environment Court, and we'd like to avoid that if we possibly can, and find a peaceful reconciliation that will see the trees retained. That means that it'll save time and money for all concerned, and retain the values of the trees in this location," said Ms Rose.

Ms Rose said it did not have to be a case of choosing between the road or the trees.

"Find a creative solution that accommodates all the transport needs - walking, cycling, busway, road corridor - and the trees and everybody will benefit from retaining the trees and the environment being enhanced," she said.

Chair of the Waitemata Local Board Shale Chambers said there were not many options left to stop the Pohutukawa trees being chopped down.

Mr Chambers said the main submission period was over, so submitters would need to appeal the decision.

He said the Auckland Council would remain neutral on the decision, but the local board did have the final say.

"The local board is the ultimate decision-maker on land-owner consent and once a decision on notice requirement is made, the board will have to consider its options on whether land-only consent is available," he said.

The next step is for Auckland Transport to review and confirm its decision, which will be done toward the end of this month.

Once Auckland Council gets confirmation, those who submitted to the hearing will also be informed - then they'll have 15 days to appeal the decision.

Auckland Transport said if that happened, it would be heard by the Environment Court, and could take months to conclude.