Thousands turned out at the Wings over Wairarapa airshow this weekend to see 100 years of aviation history on display, including replicas of New Zealand's earliest planes. 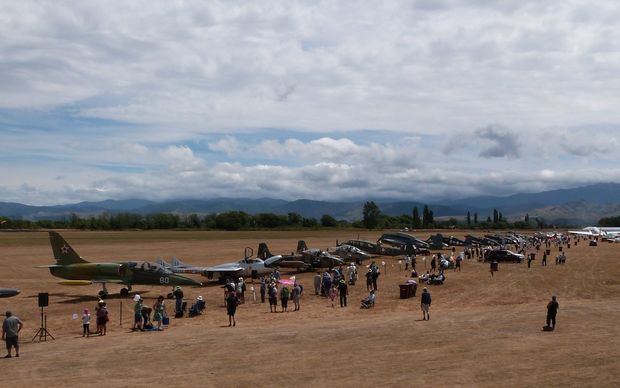 The show at Masterton's Hood Aerodrome attracted 24,000 spectators to see the more than 60 planes on display.

Aircraft that flew over the battlefields of France in the WWI, over the Pacific in WWII and some of the latest additions to the Air Force fleet were on show.

Flying display coordinator for the airshow John Lanham said the WWI planes were just like when they first flew.

One of the original planes restored by Sir Peter Jackson's company was the rare Blériot Experimental or BE 2F.

"The aircraft has been rebuilt totally by the Vintage Aviator," said Mr Lanham. 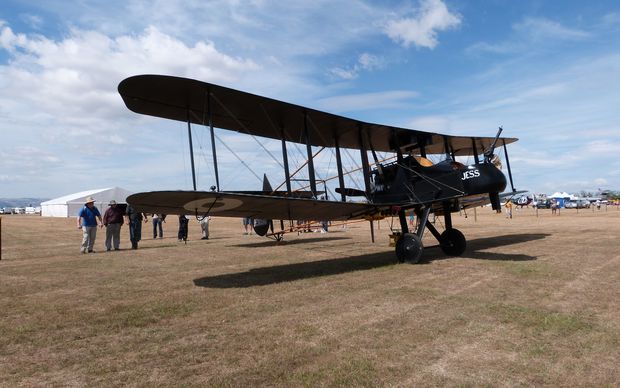 Mr Lanham said another of the WWI planes, an FE 2B, was a great example of how designers experimented.

"This massive black aircraft is a great example of the problems of the technology of the time," Mr Lanham said.

"It was built to solve the problem of how does the pilot and the gunner shoot forward when you've got a massive great propellor in front of you.

"They put the engine behind the pilot with the propellor turning the other way, so it pushed the aircraft along. So this aircraft is known as a pusher aircraft."

"The British and French tended to just paint their aircraft an olive drab or brown drab, with almost no colur underneath. But the Germans started experimenting with camouflage quite early and they used disruptive patterns." 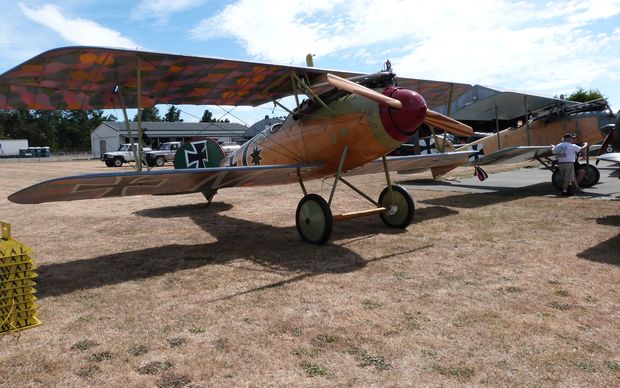 "They realised that aircraft could see things that the people on the ground couldn't," he said.

As more and more planes were sent up see over enemy lines, other planes tried to shoot them down, initially not very successfully.

"They carried pistols and rifles and it was ridiculous. There's no way you're ever going to hit anything with a rifle. Then somebody lugged a machine gun up in one of these aircraft ... that was pretty hopeless too," he said.

"In this business of trying to shoot down the other guy's reconnaissance aircraft, that's how, slowly, aerial combat evolved," he said. 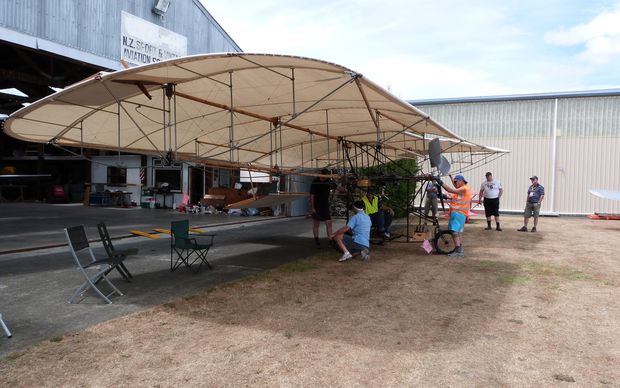 Also on display, from an even earlier era, was a reproduction of the plane Richard Pearse was believed to have flown on 1902 or 1903.

The Richard Pearse Two (RPT) was built by Ivan Mudrovcich of Auckland.

"I knew of Pearse and I was always interested in aeroplanes," Mr Mudrovcich said.

"I think it's a good copy. That's my story anyway."

"What we are aiming to do is to prove or disprove if flight is possible. By getting it this far, we think it probably is possible.

"Now we've just got to get the conditions right for an attempt at flight."

In a first, the reproduction of Richard Pearse's plane managed to taxi alongside the runway this weekend.

But getting airborne was the Harvard aerobatic team.

One of the pilots, Warbirds Association president Frank Parker, said the windy conditions made the formation flying hard but enjoyable work.

"Probably the moment that gets the heart rate up when the leader of the formation says, 'right, landing lights on, we're running in'. Because you know from there you're on display."

The thousands of aviation enthusiasts at the show were impressed with what they saw.

One of them was Nick Spark, who is a regular at Wings over Wairarapa.

"Hundred year old planes that are still flying and the technology between then and now ... it's incredible, absolutely incredible."