But nestled next to Parliament is an attraction less explored - a monument to New Zealand's monetary history at the Reserve Bank Museum and Education Centre.

For curator Mark Holland, its highlight is the Monetary National Income Analogue Computer - Moniac - that uses water to show the effect of economic changes. 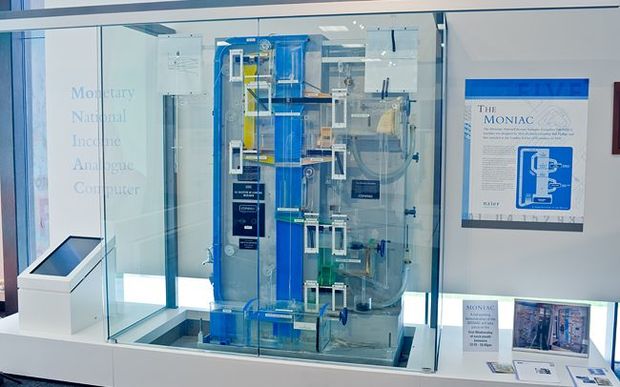 The Moniac used water to demonstrate the effect of economic changes. Photo: RBNZ

The Moniac was the brainchild of New Zealander Bill Phillips in the late 1940s.

He wanted to explain the financial world to his students at the London School of Economics without scribbling equations on a blackboard.

Fourteen Moniac machines were made - and one of them sat in Wellington.

"The economy is a closed system, so if you make a change in one part is has an impact on another part," he said.

The machine used water as a visual demonstration of what impact changes, such as lowering taxes, would have on the overall economy.

Less water, or less tax take, meant less water to go towards government spending, and so on. But because the economy was a closed system, the water had to flow elsewhere.

"[The Moniac] was accurate to plus or minus 1 percent.

"They were essentially a teaching tool, and the London School of Economics used this one to teach students until 1992."

Watch more on the Moniac machine

One of the key functions of the Reserve Bank is to control inflation, said Mr Holland.

The bank had a special display explaining inflation, including how the bank controlled inflation, and has had exhibits about inflation in the past.

"We've got an old German bank note from the 1920s, a bank note from Yugoslavia in the 1990s, and a 100-trillion dollar note from Zimbabwe which at the time may have been able to get you an egg. That shows you how high inflation was in Zimbabwe in 2008." 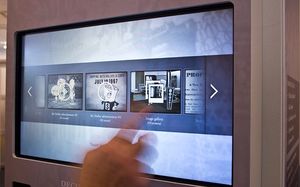 From there, it was off to the ancient coin display.

He said the Hobbit coins were a favourite with foreign visitors, who wanted to know where they could buy some immediately.

The coins were also legal tender but Mr Holland said people would be crazy to use them in a shop.

Late this year, the government will bring in new notes with added security features, and an extra focus on te reo Maori. Enlarged versions of the new bills sat proudly on the museum wall.