A man says he saw a bar patron throw a punch at the Auckland Blues winger George Moala before a brawl broke out. 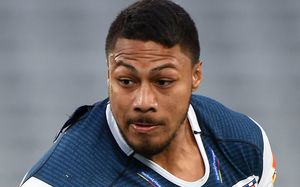 Mr Moala and his brother Siua are on trial at the Auckland District Court, and have denied charges of assault with intent to injure and assault in 2012.

Lutui Fonua has known Siua Moala since they were at school.

He said he was at the Desi Lounge on Auckland's Karangahape Road in December 2012 when he heard one of Mr Moala's sisters yell out.

He looked up to see a big man standing in front of George Moala with his fists raised, and then throwing a punch at him.

Lawyers for the Moalas have said their clients were acting in self-defence.

George Moala not involved in fight inside club - partner

George Moala's partner Vava Fosita told the court today she held him back as he was challenged for a fight at the Desi Lounge.

Giving evidence for her partner, she said he was not involved in the fight that broke out inside the club.

But as they left the club, she said, she was hit in the face and that was when George stepped up and punched the man who had hit her.

Yesterday, the court heard from Clifford Matoka who was left with a black eye and concussion and bleeding heavily from the neck.