A 12-year-old girl is one of five people taken to hospital after a jet boat hit a rock in the Shotover River in Queenstown. 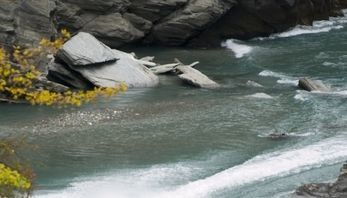 Four others suffered minor injuries and were driven to hospital.

Mr Perriman said the boat was operated by Shotover Jet and there were a total of 15 people on board, including the driver.

He said the company's immediate focus was on the wellbeing of its customers and staff.

"Our staff are at the hospital supporting the customers, their families and friends and that's our main priority at this moment in time," he said.

Mr Scott said he was not in a position to discuss the incident in any further.

Shotover Jet said it contacted Maritime New Zealand over the incident, and the Queenstown Lakes District Harbourmaster Marty Black has been on site to inspect the boat.

The company also said it planned to carry out a full internal investigation into the incident.

It expects to resume operations tomorrow.

Early details were that the injured child was a teenage boy.