The Fire Service says a scrub fire near Rolleston west of Christchurch has been contained, but it will be a few hours before it is extinguished. 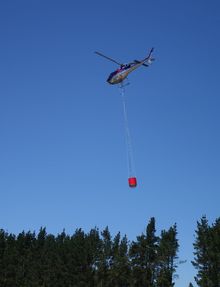 A monsoon bucket being used in the blaze near Rolleston. Photo: RNZ / Patrick Phelps

The latest in a spate of fires during a hot, dry Canterbury summer began just before midday today.

Canterbury Fire Service area commander Dave Berry said it took just under two hours to get the fire under control after it threatened some homes downwind.

Police said a helicopter with a monsoon bucket had been used to quell the blaze, refilling the bucket from private swimming pools nearby.