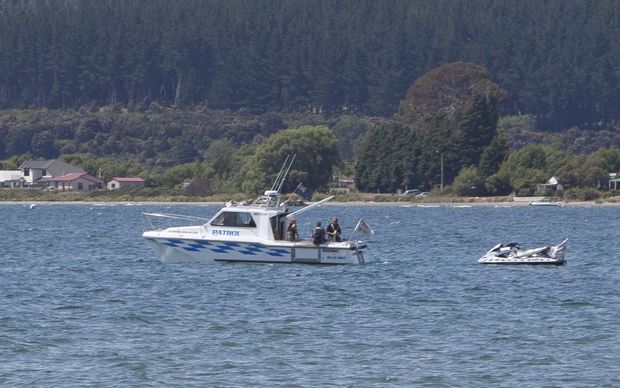 Police at the site where the Skydive Taupo plane crashed into Lake Taupo. Photo: Jeremy Bright

The 13 people on board the plane successfully evacuated it in flight after a reported engine problem, before the aircraft crashed into the lake near Waitahanui. All survived with little or no injuries.

Police confirmed the pilot was among those who bailed from the plane with a parachute.

As well as the pilot, there were six crew and six passengers preparing for tandem skydiving - and they evacuated the plane in tandem.

Only one person injured - St John

St John Ambulance said they checked and treated the people at the scene - all aged in their 20s and 30s. It said just one person was injured, suffering what was thought to be minor scrapes from landing near blackberry bushes.

The plane crashed into relatively shallow water off the shore line at Waitahanui.

Police received reports of the crash at about 12.15 today while St John said it was first alerted at 12.18pm.

Eyewitness Sue Stubbs told the BBC she watched the skydivers quit the plane.

"The plane's engine just stopped. The plane just glided along for a little while. Within - it must have just been seconds - I thought maybe half a dozen skydivers jumped out, parachutes open," she said.

"With that, the plane glided on a little bit further and did a big loop around land area and then nose-dived into the lake."

Another witness, Robbie Graham, said he saw parachutes coming down and thought straight away it was strange. He said all bar one would have landed in the lake.

Mr Graham said rescue crews were quickly on the scene. 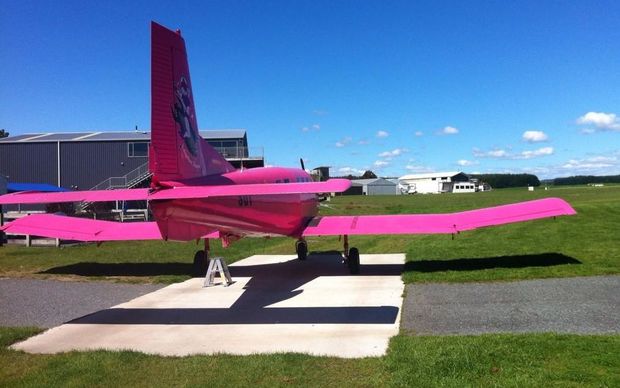 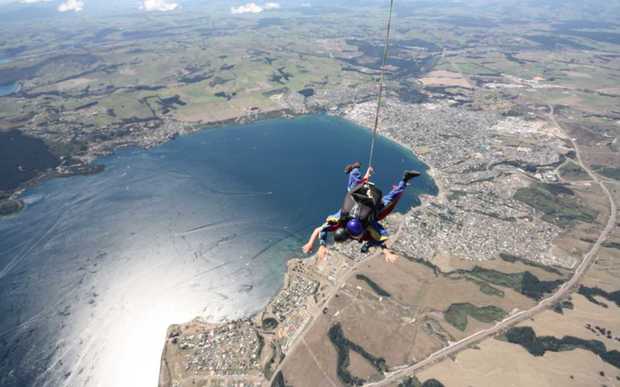 Skydive Taupo CEO Roy Clements said the six professional skydivers who jumped from the plane with their clients were dealing with the crash well.

"Most of these situations, they just want to hang together, you know, and discuss what's gone on. So they're doing their own debrief at the moment, in the appropriate way," he said.

Mr Clements said they were a unique group of people who jumped out of planes for a living, and they dealt with the situation today very calmly.

Earlier today, he released a short statement about the crash:

"At approximately 12.25pm, a skydiving plane encountered an engine problem shortly after take-off. All parachutes including the pilot exited the plane and landed safely."

Three TAIC investigators in Taupo have begun an investigation into the cause of today's crash.

A spokesperson, Peter Northcote, said the inquiry team had interviewed the pilot of the plane, and collected the plane's records.

Mr Northcote said they had also arranged a survey of the wreckage and its removal, which was expected to take place tomorrow.

He said it appeared to have broken into several large pieces as it hit the lake and police divers would take pictures of it tomorrow morning.

The inquiry will set out to identify what occurred and why, and to make any recommendations that might help prevent similar accidents.

The investigation may take 18 months but, should it need to, the commission has the ability to issue interim reports or safety recommendations before the inquiry is complete.

The Civil Aviation Authority has also been notified and will be investigating the cause of the crash.

The spotlight was most recently cast on the skydiving industry after nine people died when a Skydive New Zealand plane crashed soon after take-off at Fox Glacier airstrip on 4 September 2010.

The plane was overweight and loaded rear of its centre of gravity but something also happened at take-off, such as ''inadvertent pilot error or engine malfunction/mechanical failure'', the coroner later found.

The coroner, TAIC and victims' families all criticised the legislative and safety environment which existed at the time.

Since then, new regulations governing the adventure tourism industry have been put in place.

Did you witness the plane crash? To share your story, pictures or video with us, please email them to: iwitness@radionz.co.nz