An arsonist may be responsible for a series of fires in Canterbury's Waimakariri District, including a pine plantation fire yesterday.

Forty properties had to be evacuated because of the threat posed by the fire at Pines Beach, near Kaiapoi.

Waiamakariri's principal rural fire officer, Tim Sheppard, said he believed a firebug could be responsible for that one and about 20 others over the past few months.

He said they were not the result of carelessness with discarded cigarette butts or glass.

Mr Sheppard said since the fire season started there had been fires lit at Cust, Fernside and others in the Pines Beach area.

He said help from the people who lived in the Waimakari district would help catch the culprits.

"We appeal to people to be vigilant, look out for cars in odd places or activity that doesn't usually occur around your area and as I say the more it happens in one spot the more vigilant people become I think and these guys eventually trip themselves up."

The Fire Service earlier described the fire that engulfed almost two hectares of a pine plantation in Pines Beach near Kaiapoi yesterday as 'suspicious'.

About 40 properties were evacuated but residents have now returned home.

Mr Sheppard said the fire could have caused a lot more damage than it did and he was confident the worst was over.

A Fire Service spokesperson said at the height of the fire, about eight crews were at the scene, and a helicopter with a monsoon bucket was used. 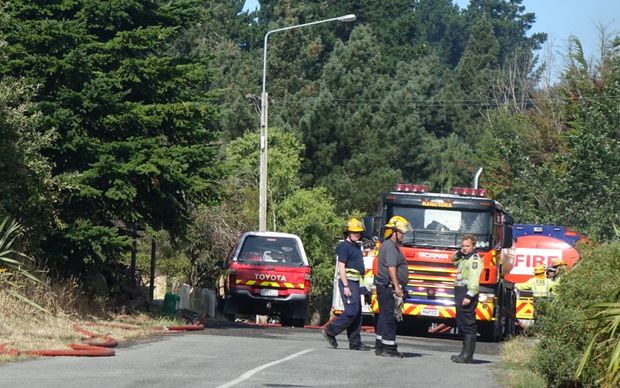 Police are asking the public to avoid the cordoned area around the plantation while the scene is investigated. Photo: RNZ / Patrick Phelps

Pines Beach resident who was evacuated, Melissa Haberfield, said she heard the fire from her house.

"We heard the siren go off, for the volunteer fire brigade straight across the road, and we were upstairs in our house and heard the crackling noise, so I went out onto the balcony and saw all the flames and smoke coming up behind the house, it was really loud, the roaring and the crackling of the trees being burnt," she said. 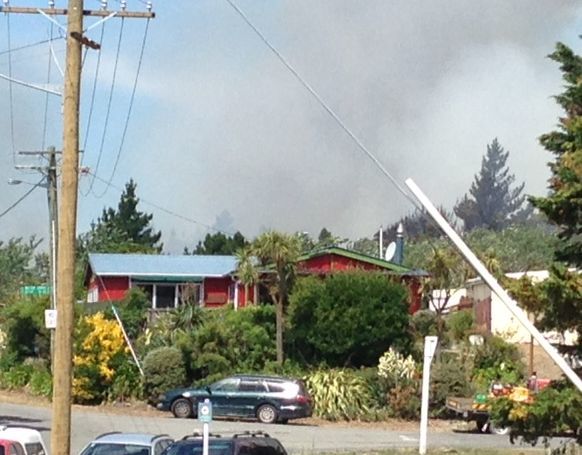 The fire has forced the evacuation of 40 properties. Photo: NZ Police

"I couldn't smell the smoke in my room until I walked into the kitchen, and I was blown away by how strong it was in the room closest to the forest," she said.

"I probably won't sleep too good overnight, just because it's so thick it's burning underneath the ground, so we're wary."

The Fire Service said a rural fire crew stayed at the scene overnight, with patrols to monitor the area, and dampen any hotspots.

Police said sun and wind in Canterbury had made the land very dry, and they asked the public to report any suspicious activity or signs of smoke in remote areas, and to take care when in scrub land.