New Zealand Post is "horrified" by the actions of CourierPost staff caught on video kicking and mishandling parcels in Waikato this week, it says. 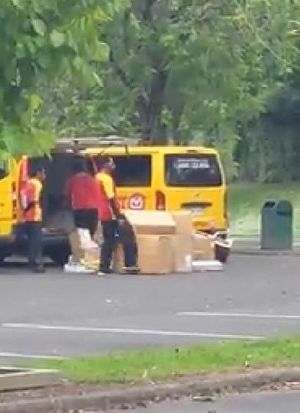 The video shows one of the CourierPost staff kicking a parcel. Photo: Facebook

The video, which was posted on the Facebook page Shocking Auckland Drivers, showed three men wearing CourierPost uniforms surrounded by packages, and one of the men kicking a parcel on the ground.

Alan Court, spokesman for New Zealand Post owner CourierPost, said the company was horrified and had started a disciplinary process.

"We were horrified, because it's not how we expect our people to behave and it's not who we are," he said.

"People take a lot of pride in packaging items, and they trust us to deliver it carefully.

"Those actions within that video didn't demonstrate care at all."

New Zealand Post had identified one contractor and three employees of that contractor, and had started a disciplinary process with them. It was too early to say what the outcome could be but the company was treating the matter as a serious misconduct issue, Mr Court said.

The company was also trying to establish whether any of the parcels had been damaged, he said.

"We haven't been able to establish that. We're working with the individuals that were identified and, through that process, attempting to identify the customers who may have been affected."