An Auckland family with a severely disabled daughter that had been waiting two years for a ramp to help them look after her have finally had it installed. 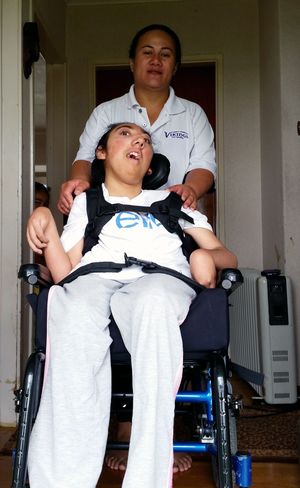 Carol and Manisela Pole said they had been forced to carry their 16-year-old daughter up and down the stairs to their house in her wheelchair, and instead of having one put up, their request was bounced between Government departments.

Launga Pole has spent most of her life in bed, after falling into a swimming pool and almost drowning, leaving her severely brain damaged.

But after the issue was raised by Radio New Zealand News last week, Auckland District Health Board installed the ramp for the family.

Mrs Pole said it was put up by midday Sunday, and that it was a nice ramp which made it easy for her family to take Launga in and out of the house.

She said her morning routine to get her daughter ready for the special school she attended would take about 45 minutes, and a lot of strength to get through.

She said she wanted a ramp to help her get Launga in and out of the house.

"I started hurting my back, pushing and pulling her on the stairs. I found out I have arthritis, from my doctor, so I have a lot of difficulty," she said.

"We have a hoist lift, which is help for her in bed, but to transfer her...the wheelchair is the heaviest part."

Ms Pole said she was frustrated and fed up, but she wanted to make sure Launga was as comfortable as she could be.

"It's been a long time, and I don't know how long we'll be with her - and it frustrates me because the more comfortable she is, the more life we have living with her."

Mr Pole said Housing New Zealand had offered them other modified houses to live in, such as a five-bedroom property in Meadowbank.

But he said they had to decline it as to make ends meet, he had to keep working with his concrete-laying business and needed a garage for his equipment.

"Basically I'm the one bringing income in for the family. We have a benefit, and that covers the house, and gas, and food, but any of the other bills come to me - so I'm the only one out there."

Housing New Zealand said they approved the installation of a temporary ramp back in 2012, but Auckland District Health Board had never installed one.

But a spokesperson from the health board said that was not correct.

"The DHB assesses for patients in these circumstances, and then makes applications to the Ministry of Health for equipment - the ramp falls into this category, and we have taken these steps," said the spokesperson.

"Housing New Zealand told us the house was not suitable for modification...so the matter sits with them to either find another property acceptable to the family, or reconsider its earlier decision."

But Housing New Zealand had insisted the ball was not in their court.

A spokesperson said it had urged the family to go back to the Ministry of Social Development to restate their needs, so their application to move houses could be finalised.

After the long wait for a ramp was highlighted by Radio New Zealand News last week, there were offers of support for the family.

The Auckland District Health Board then made contact with the Pole family, and said they would put the ramp up.

A spokesperson said the DHB and Ministry of Health staff reviewed the issue after a discussion with Housing New Zealand.

"We want to ensure this family and particularly Launga have safe access to their home. We've agreed we should install a temporary modular ramp given the extenuating circumstances," the spokesperson said.