The man charged with a murder at a 21st birthday party will spend Christmas in prison. 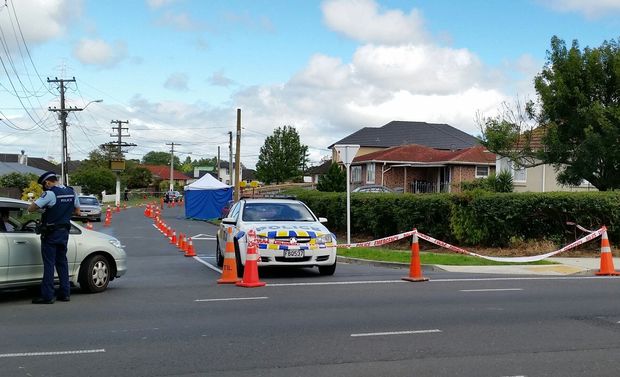 The scene of the incident on Fisher Crescent in Otara on Sunday. Photo: RNZ / Kiri Ennis

Robert Timothy Rapana appeared at the Manukau District Court today and was remanded in custody.

He was due to next appear at the High Court in Auckland in February.

Mr Rapana was charged with the murder of Chevy Davis who was found dead early yesterday morning in what the police said was a fight over music.

He was also charged with intent to cause grievous bodily harm.

That charge related to an assault on Rio Davis, who was believed to be Chevy Davis' cousin.

Ms Togiaono was let out on bail.

Amongst her conditions were a 12 hour overnight curfew.

She was also not allowed to go within 1km of Fisher Crescent.

That was where police found Mr Davis' body and they had also since found a knife.

There was a crowded public gallery in court today.

Judge David McNaughton told them before the hearing got underway that he did not want anyone yelling or being aggressive.

Initially, Mr Rapana was given name suppression but that only lasted for about two hours.

When the matter was first called, Mr Rapana's lawyer Karl Trotter argued that his client's name should be suppressed because he had not had the opportunity to talk to his family and tell them of the charges.

Judge McNaughton said that was not a ground for name suppression.

Mr Trotter than continued his submissions, saying his client believed Mr Davis had gang affiliations and he had concerns about the safety of his family.

That drew laughter from the public gallery.

Judge McNaughton pointed out that people close to the case, including Mr Davis' family and friends, were likely to know the name of the man arrested.

A Sergeant from the police prosecution unit said she was supporting the suppression application because the investigation was in an early stage, but she did not elaborate further.

Judge McNaughton said that was not enough to grant name suppression and he called for the police officer in charge of the case to come to court and answer questions.

When the case was called again, police indicated they no longer wanted suppression.