Police do not believe firearms were the primary target in an Auckland burglary in which 16 guns and 5000 shotgun shells were stolen. 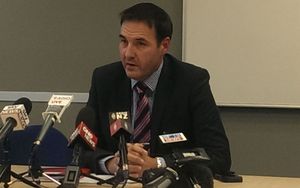 The haul from the house in the eastern suburb of Buckland's Beach on Thursday included rifles, shotguns and semi-automatic guns.

Police said jewellery, silverware and alcohol were among other items taken.

Detective Senior Sergeant Darrell Harpur said they were treating it as a general burglary and did not believe the firearms, which were secured in a locked room, were specifically targetted.

"There's been other items, there's been jewellery ... silverware, alcohol," he said.

"So at this stage it's a general burglary. All items of property have been taken.

"A flat screen TV was ready to go in the garage, so we don't know if anyone was disturbed at this stage."

Police were doing all they could to find who had the weapons to get them out of the hands of criminals, Mr Harpur said.

The suspects, who were driving a white truck, entered the house through a rear ranch slider and left behind a crow-bar and a trolley jack. A deregistered number plate was found at the top of the driveway.

"That won't matter. If criminals want stuff they're going to get it anyway.

"We've got some of the strictest gun laws in the world and I don't believe that we're going to stop criminals from accessing firearms."

Most gun thefts in New Zealand are opportunistic, not targeted, Mr Foster said.