The head of the Corrections Department says Waikato's Spring Hill prison had too many high security prisoners during a riot. 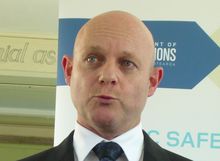 At least 27 inmates ran amok in two cell blocks for 10 hours during the riot on 1 June last year, after drinking homebrew made from fruit and hand sanitiser, causing about $10 million in damage.

An internal inquiry has found that staff managed the riot well, demonstrating courage and bravery under difficult conditions.

However, the department's chief executive, Ray Smith, said on Thursday the jail was not set up to cope with high numbers of unruly prisoners.

Mr Smith said long lock-up periods were just one of many factors contributing to the riot and the process has now been changed.

A recommendation limiting prisoners' access to fruit and removing alcohol-based hand sanitise would also be implemented.