Scientists have found an egg of a New Zealand bird once considered extinct.

The New Zealand storm petrel, a sparrow-sized seabird, was rediscovered in 2003 having not been seen for more than 150 years. 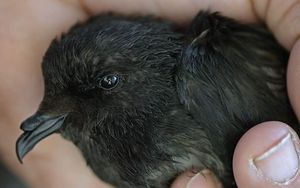 Researchers have found the egg on Little Barrier Island in the Hauraki Gulf marine park, near Auckland.

The egg measures about 3cms by 2cms and is white with a dusting of pink spots.

Principal science advisor of the research team Graeme Taylor says it is exciting to see the egg of a bird once presumed extinct.

The scientists expect the egg to hatch in early April, and have remote cameras set up to monitor the birds.