Public health experts in Christchurch are worried about the health risk from cancer-causing concrete dust due to rapid demolition and building in the earthquake-hit city. 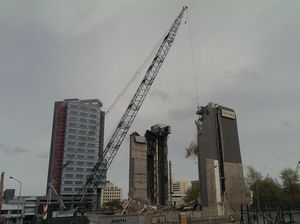 Demolition resumed at the Copthorne Hotel in October 2013. Photo: RNZ

They are proposing a study to find out just how badly construction workers are exposed to the carcinogen.

The dust contains a natural compound called crystalline silica that can cause lung cancer when the tiny particles are inhaled.

Bill Glass from Massey University says a study is needed because very little is known about exposure rates to the concrete dust.

Professor Glass says the study has not had its funding approved yet, but hopes this will happen in 2014.

The Canterbury Earthquake Recovery Authority is promising to have all homes on flat land in the residential red zone demolished by the end of next year.

Some 40% of the 7839 homes that have been deemed uninhabitable have now been demolished, but progress is slower than the authority had hoped.

This is because demolitions are taking place one by one, depending on which insurance company is paying out for a particular property.

The authority says it hopes to meet its 2014 target by bringing together multiple insurers and the Earthquake Commission which will allow it to clear entire blocks.