For the past two years Covid-havoc has shut schools, kindergartens and universities, disrupted learning for more than a million young people, and all but eliminated what used to be a $5 billion international education industry. 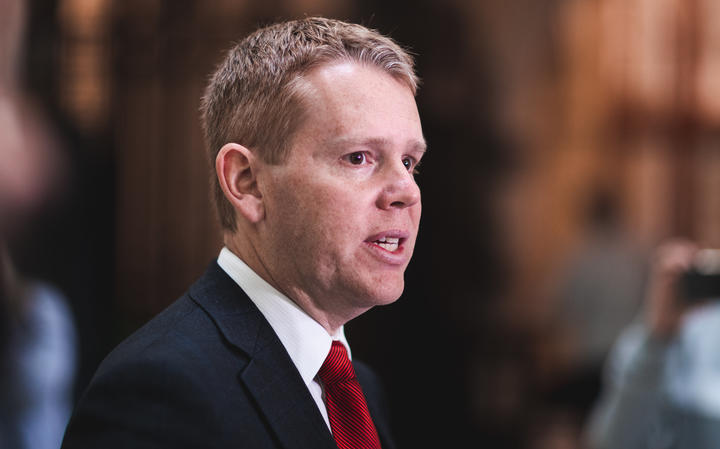 Chris Hipkins expects next term will look more settled for schools than term one did. Photo: RNZ / Samuel Rillstone

As the first school term of the third year of the pandemic draws to a close the Education Minister Chris Hipkins reckons things are about to get better.

"I think term two is probably looking more settled than term one," he says.

"If we look at the overall nature of the outbreak which is that things are starting to settle and so hopefully term two we should see a bit more of a return to regular classroom learning," he says.

But beyond the next three months he is not prepared to make any bets.

"What's the rest of the year going to look like? Again it's still quite early to tell. We don't know what comes next after Omicron, we don't know. It could be another variant, it could be we start to see things returning more to normal."

Hipkins says there is likely to be a peak of winter illness - some Covid-19, some influenza - and that will affect schools and early childhood centres which sometimes struggle to replace ill teachers.

"It is still going to be a bumpy year, I think."

Hipkins says it is not yet clear what effect the past two years has had on children's learning.

The strongest evidence relates to teenagers who were granted extra NCEA credits in both 2021 and 2020 to make up for classroom time lost to lockdowns.

Hipkins is confident the government got the balance right - mitigating the negative effect of the pandemic without lowering the value of the qualification, something he said is reinforced by the reaction, or rather lack of reaction from universities.

"We didn't get significant feedback from the universities saying that the kids in 2021 arriving at university were less prepared than the ones who arrived in 2020 which suggests that balance was about right."

As for younger children, Hipkins says evaluations suggest they continue to make progress despite the disruption to their learning.

But have they fallen behind? The Education Ministry last year reported that children largely made up for 2020's school closures by the end of the year, except in writing where gaps equivalent to 16-20 weeks of learning emerged for teenagers in the early years of secondary schooling.

Hipkins does not have a definitive answer but he believes kids can catch up.

"One of the positives that's come out of the Covid-19 experience is just the strengthening of the home-school ties," he responds, explaining that families have a much better idea of how to support children's learning and that will help make up for the loss of classroom time.

"I'm not going to confidently predict at this point that that's going to be the answer to everything but I think that that will help to compensate for some of the disruption that we've experienced," Hipkins says.

As well as disrupting learning, the pandemic struck in the midst of two major reforms - the overhaul of vocational education and training, and the response to the review of the Tomorrow's Schools system of school management and governance.

Hipkins says Covid-19 has had little impact on either project.

He says some aspects of the school reforms have been delayed while teachers and principals are dealing with the virus, but that's allowed the Education Ministry to get on with "quite dramatic" internal changes.

Those changes, including a new leadership structure and the creation of Te Mahau, a new division aimed at providing more direct support to schools, have added about $6 million-a-year to the ministry's budget.

Hipkins says it will result in better classroom resources and training for teachers that will in turn improve children's achievement.

"Having good people at the ministry who are experienced teachers who can work with other teachers to help them improve their practice, those are the sorts of things that are really going to turn the ship around," he says.

"One of the things I get frustrated by is it's an easy criticism to say the Ministry of Education is getting bigger but actually when you look at what those people are doing, those extra staff employed by the ministry are doing, they're doing front-line roles that are going to help to arrest the decline that we've seen in areas like numeracy and literacy."

The minister is more circumspect about the Reform of Vocational Education and Training which created the new national polytechnic and workplace training entity, Te Pūkenga.

Asked if he is confident it's going well, he stresses that this year is critical for the new organisation because it must figure out how it is going to bring together workplace and campus-based learning, and make all 16 subsidiary polytechnics into a single national network.

"I'm monitoring it very closely because I think the next two or three months are really critical," he says.

A potential source of disruption this year is teacher pay talks but Hipkins says he does not expect a repeat of the stalemate and strikes that accompanied the last round of negotiations in 2018-19.

He says complaints related to workload and employment conditions are being addressed and he hopes they won't be as much of a feature this time around.

But he acknowledges teachers might be seeking significant pay rises.

"With the cost of living going up I think across the public sector we're going to see some challenging conversations in bargaining about what's affordable in terms of pay increases," he says.