Analysis - Christopher Luxon is considered both an unknown quantity and something of a messiah for the National Party. 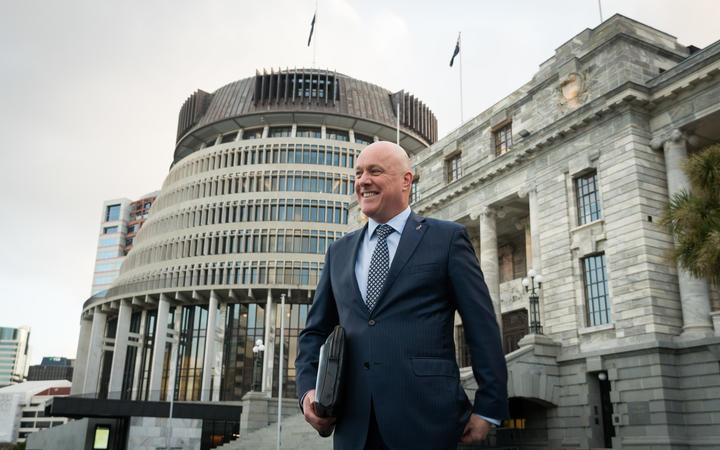 A first-term MP who won the National stronghold Botany electorate in the 2020 election after the departure in disgrace of Jami-Lee Ross, Luxon has kept a relatively low political profile since.

He is an evangelical Christian - though he does not like the label - and is perhaps best known for leading Air New Zealand as its chief executive for six years.

At 51 years old, Luxon had long been hailed as a potential future leader, including by the likes of National's former prime minister John Key.

"We both share very similar economic views, we're economically conservative but we're internationalists - we want to see New Zealand engage with the world and trade with the world and have a harmonious, multi-cultural society operating in New Zealand," Key said in April last year after Luxon announced his candidacy for the Botany seat.

The two have been often compared (including by Key himself) including for their casual but businesslike manner. While Luxon said he was not "John Key 2.0" when he went for the Botany seat, he admitted Key had encouraged him to stand.

However, while Key had four years to get to grips with politics and Parliament before taking the leadership, Luxon has succeeded to the role in just over a year, after a tumultuous period for the National Party.

Having spent months of his year so far of politics in lockdown, he could be forgiven for a limited impact on three of his four portfolios - Land Information; Research, Science and Manufacturing; and Associate Transport.

He has been more successful with his local government portfolio. With just 17 media releases in his name on the National Party website, almost all of them dedicated to his biggest hot-button issue - three waters reforms - and he has proved effective at criticising the government on that.

He has also largely evaded controversy except when Air New Zealand was revealed to have been contracted for repair work by the Saudi Arabian military.

Luxon was in charge at the time, though it was not revealed until he had left. He said he had no idea about the contract at the time, but admitted it was a mistake not to establish a process in which the chief executive would be told about all military contracts.

"I've no recollection of that, no, none whatsoever. I wasn't aware of the issue," he said. He was backed on this by his successor Greg Foran, who said it was a small $3 million contract that - had he been in charge - would not have reached his desk.

His leadership of the company has otherwise received plaudits, delivering record profits and customer satisfaction scores.

He has said New Zealand needs to have many more companies that operate on a global scale, and expressed concerns about productivity in New Zealand, and the potential to boost it through investment in research and development and infrastructure.

Economics was a theme he returned to today in his opening statements as National's leader - targeting supermarket and petrol prices - along with Covid-19 and the rural-urban divide.

His political philosophy is also very much in the mould of the National Party - as espoused in his very first speech to Parliament, in March.

"I believe in tackling inequality and working hard to find that balance between encouraging hard work and innovation while always ensuring there is social mobility and a safety net."

Luxon also spoke about his personal life in that speech, including his faith - perhaps partly in an attempt to ameliorate the potential damage of being labelled "evangelical".

"It has anchored me, given my life purpose, and shaped my values, and it puts me in the context of something bigger than myself," he said, but he also tempered that with an affirmation of his belief in the separation of church and state.

"My faith is personal to me. It is not in itself a political agenda. I believe no religion should dictate to the State, and no politician should use the political platform they have to force their beliefs on others. As MPs, we serve the common cause of all New Zealanders-not one religion, not one group, not one interest."

It was a sentiment he repeated in his first statements as National's leader.

He told Newstalk ZB in May he reacted badly to the evangelical label "because I kind of to be honest just think of myself as a Christian rather than being a certain type - this or that type - of Christian".

"It's never been an issue for me in my past... I wasn't a Christian CEO, I was a CEO who just happened to be a Christian and the same thing here."

He seemed to lament the association of evangelical Christianity with the supporters of Donald Trump.

"Evangelical supporters, I guess, have not been speaking up enough around the cruel and dehumanising language which he's using or the bullying manner in which he's going about it," he said.

Outside of his faith, Luxon today described himself as a man who loves country music and water skiing, and as an extrovert who knows how to lead people.

He was born in Christchurch and raised in Howick, Auckland before attending schools in Botany including Cockle Bay Primary and Howick College. He met his future wife Amanda when he was just 15 years old, and they have two children.

"She is my best friend ... quite simply, the most extraordinary person I know: strong, wise, smart, and funny."

He told Parliament his father Graham had worked his way up from sales rep to general manager. His mother Kathleen meanwhile became a psychotherapist later in life, studying for a diploma in the same year Luxon himself began at University of Canterbury.

There, he studied a bachelors and masters in commerce (business administration), before beginning an 18-year career at multinational consumer goods company Unilever, where he rose to become President of its Canadian branch before his stint heading up Air NZ.