The National Party is asking why it took the government six weeks to meet with Pfizer about vaccines after the company contacted them in June last year. 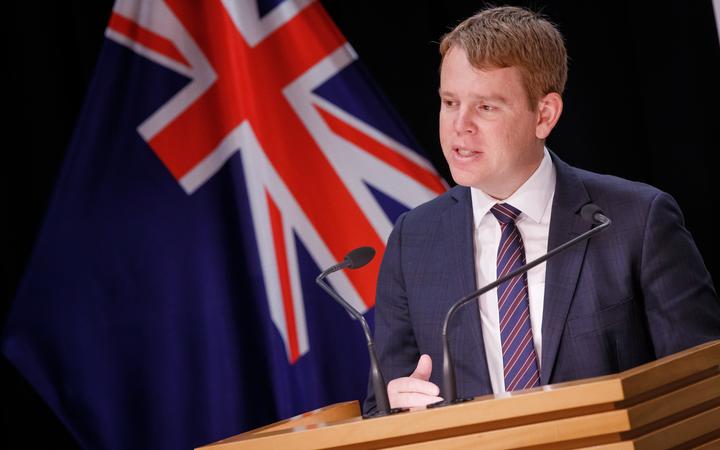 However, the Minister for Covid-19 Response Chris Hipkins rejects the idea the government unnecessarily delayed meeting with Pfizer.

Hipkins has, in response to written Parliamentary questions from his National counterpart Chris Bishop, released a letter from Pfizer to Vaccine Strategy Taskforce chair Peter Crabtree on 30 June last year.

The letter details Pfizer's efforts at that time to develop and test an mRNA vaccine and advertises "the potential to supply millions of vaccine doses by the end of 2020, subject to technical success and regulatory approvals, then rapidly scale up to produce hundreds of millions of doses in 2021".

It said Pfizer would welcome the opportunity to discuss planning for Covid-19 vaccinations in New Zealand, and the company's corporate affairs manager would contact the taskforce to arrange a meeting.

Australia's health minister Greg Hunt came under fire last year after a similar letter sent to him the same day, was made public. His staff did not meet with Pfizer until 4 August, but Bishop said that was still 10 days earlier than MBIE's first meeting with the company.

The exact timing and content of the New Zealand government's response to Pfizer and any other communication leading up to that meeting is not yet clear, but Bishop said the delay showed government had grown complacent over vaccinations after its success in eliminating Covid-19.

"It's just demonstrably true that we had the develop world's slowest vaccine rollout for the first six months of this year," he said.

"We were being held up as a world leader and a paragon of countries, and a lot of people took a lot of pride in that and I suspect the government did the same thing and to be fair to them it was a magnificent achievement, but you're only as good as what's gone before and the government just didn't stay ahead of the game.

"What a lot of people don't realize is that we didn't actually dot the i's and cross the t's on the Pfizer contracts until just before Christmas 2020. So we took a very long time from June last year before we actually got into the nitty gritty and signed these contracts."

He said the government's slow progress last year on signing the contracts had led to a slower vaccinations rollout, which meant that when the Delta variant arrived in New Zealand and began spreading in the community in August this year, only 20 percent of the population was fully vaccinated.

Hipkins said New Zealand had not run into supply problems because of other countries being faster.

"The negotiations typically involved the signing of a confidential disclosure agreement ... that was supplied by Pfizer to New Zealand's representatives towards the end of July, I signed very quickly thereafter and conversations were ongoing throughout that period.

"If we rewound back ... to when conversations around vaccines first started, even the most optimistic people I don't think were predicting that we would be this far through vaccination across the globe as we are now."

He said it was worth remembering there were 200 vaccines on offer at the time, "and everyone was trying to sell them to us ... if you look at the four that we ended up purchasing we made I think quite good decisions about which ones to go with".

"If you look at what we purchased initially ... 1.5 million doses of the pfizer vaccine and we did get access to those in accordance with the agreement.

"It's difficult to go crystal ball gazing back through time and say if we'd asked for five million courses of the vaccine at that time would we have been able to get them earlier, I don't know the answer to that and we will never know the answer to that. We made the decision early this year to order those additional doses and then they were delivered and in keeping with teh schedule Pfizer agreed with us at that time.

"Could we have done things differently? Undoubtedly yes, but we had to make decisions based on what we knew at that time."

However, Bishop said his concern now was the government would be similarly behind the eight-ball when it came to new Covid-19 treatments like ronapreve, sotrovimab and molnupiravir, which have been shown to be effective at treating the symptoms of the virus.

"This is literally a case where it doesn't matter how expensive they are," Bishop said. "In a situation where we have Covid in the community we're going to have to treat people, and it's something that I think all New Zealanders should get behind."