Church groups making oral submissions on the bill banning conversion therapy have offered a range of views about it, some calling for it to be scrapped outright and others in firm support. 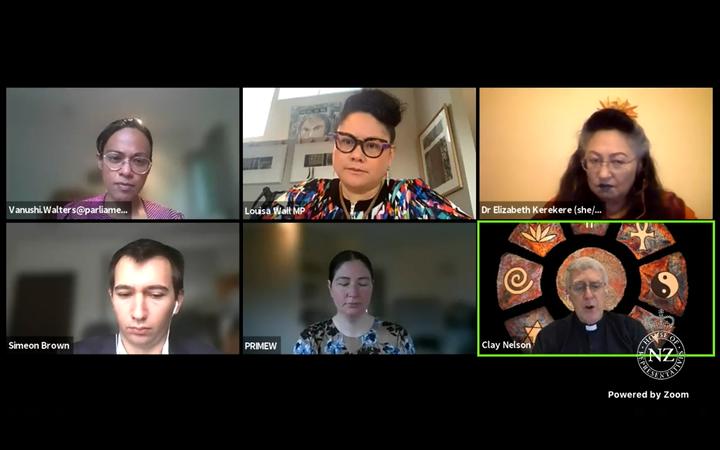 The committee, chaired by Labour's Upper Harbour MP Vanushi Walters, has been hearing the submissions after consultation on the bill closed on 8 September, with a record more than 100,000 written submissions made.

Conversion therapy involves attempts to change a person's sexual orientation or gender, despite that not being possible, and can cause serious harm.

Churches have been among some the main groups openly opposing the bill some out of concerns about religious freedom, others over fears about what they say could affect parenting (despite parents being unlikely to be much affected) and genuine pastoral advice.

Many church groups have also supported the law, and even called for it to be strengthened.

In a previous statement, Justice Minister Kris Faafoi clarified some misconceptions over the bill, saying prescription - or not - of puberty blockers would be unaffected; that parents would not be criminalised unless they were actively directing their children to conversion practices; and general expression of belief would be protected.

Bill's passage 'meant to be'

Auckland Unitarian Church reverend Clay Nelson said they supported the stated purposes of the bill, saying there was overwhelming evidence about the dangers of the practices outlined in the bill, and he wanted to challenge the idea that it curbed religious freedom.

While freedom of thought and belief was important, there had been other practices in which the state had intervened to prevent harm such as female genital mutilation.

He said it was necessary to challenge claims that "faith is a gift of God, not men," and while freedom of thought and belief was important, there had been other practices in which the state had intervened such as female genital mutilation.

It should not be taken lightly that the Salvation Army and the Unitarian Church were on the same side of this issue, he said.

"The passage of it must be meant to be."

'We need to have research done'

Auckland Light of Grace Church trustee Alan said they opposed the conversion bill because they believed it was not needed and the statement that no sexuality was broken and in need of fixing was questionable.

"The first objective of this bill is to affirm the dignity of every New Zealander, that includes the rainbow community. That is already covered by the Human Rights Act 1993."

He said the group aldo had difficulty finding solid evidence to support the conclusion that conversion therapy was causing harm, questioning some specific research as having been done overseas and not having sought the opinions of people who had "successfully" gone through the practices.

Green MP and researcher Dr Elizabeth Kerekere said the self-harm and suicide statistics - and research had shown this - was due to the discrimination rainbow communities faced, not their sexuality.

She said she was aware of research that had been done in New Zealand, and questioned whether the group would change its position if the evidence was presented to them.

Alan simply restated the church's belief that the research was insufficient.

"If a behaviour is not loving ... is it Christian?'

Ponsonby Baptist Church gay and Christian group submitter Andrew Cochrane said people did not leave the church because they were gay but the way they were treated because of their sexuality.

"They're made to feel that they're wrong and they are taught to force their brain to believe they are something they're not. The 'club' of church requires certain behaviour, a code of conduct to be adhered to, a set of rules to be obeyed in order to belong ... and on the gay issue christians don't want to admit that they are wrong."

"This is precisely where reason and compassion and other aspects of Christianity ... must be relied on. If a behaviour is not loving then the question to ask is, is it Christian? A person being trans or intersex is not a moral issue, it's a biological one ... the bigger harm to these persons is one of not being accepted."

He said it was not just the overt harms in abuse such as conversion practices, it was the church culture's unspoken but explicit affirmations that being gay is wrong.

He said people should have the right to express their beliefs and choose for themselves, but on whether that extended to a right to cause harm to others, "resolutely no".

He said the group, who had all been through conversion therapy, fully supported the legislation and urged the committee to further strengthen some of the bill's language.

Reverend Andrew Moon, speaking on behalf of Auckland Alliance of Korean Ministers and Churches, said they strongly opposed the conversion therapy ban, saying everyone was free to their own belief in New Zealand.

He said church members would not change their ways and while they would try to respect, understand and embrace suggested people living non-heteronormative lives, they would do everything short of violence to stop it if they could.

"Whether this bill is passed or not we will continue to teach our children according to our own Christian values. We will teach that LGBT way of life is not the right way of life.

"If any of our children try to take hormone blockers we are going to stop them, and if they want to live with LGBT identities we will do everything we can to get them to change their mind - of course nothing violent or abusive or coercive ... but if then New Zealand is going to see us as criminals we sincerely hope that New Zealand will remain as a country where these diverse beliefs are respected."

"One of our beliefs is that biological gender is a gift from God ... like anyone in New Zealand we are free to take care of our children and raise them according to our belief."

He said they had been working hard to pass on their values and cultural heritage through school and churches.

"Regarding gender and sexuality, parents must have clear authority to education their children on that. If parents should lose their educational authority over their children starting with this, New Zealand families will surely crumble and society will suffer.

"We believe that LGBT people deserve respect and protection but likewise freedom and belief of opposing groups must also be respected and protected."

'The bill could ... constrict legitimate and non-harmful religous practices'

The New Zealand Christian Network's Stuart Lange said they supported stated purposes of the bill, and did not support harmful practices, but their key concern was that the bill did not distinguish between harmful practices and open ended counselling.

"We certainly believe the church should repudiate or avoid any patoral practice which is coercive, disrespectful or demeaning, etc ... our concern is that as worded, the bill could unjustifiably and perhaps unintendedly constrict legitimate and non-harmful religous practices, especially the appropriate and time-honoured exercise of respectful pastoral counselling, advice and prayer. In our view the state should keep out of that realm.

"If it wouldn't criminalise these things, we would like to see that in the actual text."

He asked that an additional clause in Section 5 (2) and a clause be added to exempt "respectful and open discussions regarding sexuality and gender, and advice, guidance, prayer, or support given to anyone by anyone else including parents, family members, friends, counsellors, religious leaders, or health professionals, when such advice or support is requested, and is respectful and non-coercive."

He said he had never in all his years in the church had any dealings with the kinds of practices that were proposed to be outlawed, and the church supported that aim.

"It's simply we don't want any conversation we want to have with anybody or any prayer being potentially criminalised ... that's an intrusion by the state into a realm that's always been separate from the state."

"Those wanting to explore where they're at need the freedom to seek out and receive ... advice and support."

He said the additional clause would also address concerns that the bill could compromise religious freedom, a concern that had also been raised by Crown Law.

'People have a right to think whatever they want ... and that's allowed under the bill'

Auckland Rainbow Community Church board chair Peter Lineham said some members of the rainbow community who had previously operated conversion practices later found they were harming people. Others had gone through the practices and were still dealing with the serious harms it caused them.

"Speaking on behalf of those members, the bill doesn't seem particularly strong."

He called for the bill to also apply the criminal law to adults, and said the language needed to be clearer about the clause about religious freedom.

A transgender woman associated with the church, Allyson Hamblett, said sex characteristics needed to be added to the list of protected persons in the human rights act to properly cover gender diverse and intersex people.