The sitting of Parliament has been suspended for a week amid Covid-19 restrictions, a move criticised by other political parties. 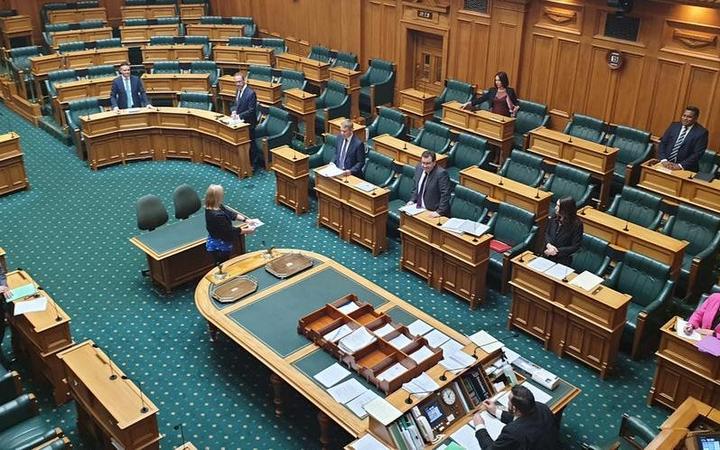 A skeleton Parliament in the house as it passes legislation to combat Covid-19 in March 2020. Photo: RNZ / Jane Patterson

"As we did last time, we have temporarily suspended the sitting of Parliament for one week on the advice of the Director-General of Health. While, of course, we want to ensure that representatives from across The House have the ability to scrutinise the government at this time, bringing MPs from across the country to Parliament does pose risk," Ardern said.

"That's why for this week, we've asked all ministers to make themselves available to appear before Parliament's select committees which of course have a range of opposition MPs and spokespeople on them as these committees will continue to meet virtually.

"That will allow us to balance safety and scrutiny. We will use the next week to see if there are other enhancements we can make. I would add that these types of alternative arrangements are common around other parts of the world as other Parliaments manage outbreaks in their countries as well...

"We did not in level 4 last time have Parliament convene, we found alternative measures to allow that scrutiny to occur in a virtual environment and we're doing that again. In fact, I think one of the enhancements is that rather than having one committee we're having multiple committees so that more MPs can access that process."

She said the disruption to Parliament had been minimal in comparison to other countries.

"I just couldn't justify when alternatives exist having MPs travel from across the country to come and convene in a closed environment where other staff members would be required to come in."

Asked if she would consider reinstating the Epidemic Response Committee rather than government-run select committees, Ardern said having a range of select committees meant a greater range of MPs and more ministers appearing.

"In my mind, question time is one hour a day, this is therefore multiple select committees that are able to meet, with different ministers, with different MPs asking questions, some would argue that that would provide even more scrutiny.

She noted the select committees would also be broadcast.

Parliament can be postponed up to a month during an epidemic under section 55 of the standing orders, but the leaders of all parties must be consulted first and it must be on the written recommendation of the Director-General of Health.

Opposition Parties have been calling for Parliament to begin again in alert level 4 conditions, or reinstate the Epidemic Response Committee as a minimum, saying suspension of Parliament is undemocratic.

'Unacceptable', 'an overreach of power'

National leader Judith Collins said important questions needed to be answered about how the Delta variant got into New Zealand, and suspending Parliament meant the government would avoid that scrutiny.

She said while the party would have accepted a week to prepare, longer was "wrong".

"The prime minister has indicated that she expects it will continue longer than that ... at a time when New Zealanders have the harshest lockdown in the world and have lost our freedoms because of the government's failure to vaccinate and secure the border, this move by Jacinda Ardern is unfathomable."

"As leader of the opposition I will be reaching out to the ACT and Māori parties to establish how best we can prevent this shut down of democracy at the very moment we need it the most."

She said Labour had also resisted all calls for the Epidemic Response Committee to resume.

"Jacinda Ardern clearly thinks that her actions and the actions of her government should be beyond reproach and is moving to ensure that is the case ... this is unacceptable and an overreach of power. It leaves New Zealanders with no ability to demand accountability and transparency from the government."

He said it was very different from having an Opposition-led Epidemic Response Committee as was seen in the previous lockdown and - far from all parties agreeing - the decision was one "dictated by Jacinda Ardern alone".

"Jacinda Ardern is happy to have a socially distanced 1pm stand up with a dozen journalists in a room but not a democratic Parliament with elected representatives asking her questions," he said.

"The suggestion that select committees with a Labour majority, which have been notorious for obstructing questioning, are a substitute for Parliament would not be taken seriously at any other time."