Conversion therapy can cause serious harm, says Justice Minister Kris Faafoi, who is introducing the government's planned law to ban the practice.

Faafoi has spoken to media this afternoon about the proposed law.

Watch a stream of the media conference here:

The government today introduced its Conversion Practices Prohibition Legislation Bill, which gives full details of planned legal changes including the penalties people would face for breaching the law.

Speaking today, Faafoi said he was really happy to introduce the legislation.

"The practices have no basis in science, are widely discredited, and can often cause serious and lasting mental and emotional damage for those who are subjected to them," he said.

He said conversion practices could cause serious harm including severe depression and anxiety, difficulties forming relationships, substance abuse and risk of suicide.

Faafoi said survivors of conversion practices had been reported to show symptoms of post-traumatic stress disorder.

"There can be no justification for trying to force someone to change their sexuality or gender identity."

Some faith-based groups like Salvation Army and the Anglican diocese had denounced the practices, he said.

"This bill will not outlaw a person's right to hold personal beliefs about sexual orientation or gender identity ... and it will not stop parents or religious leaders from offering support."

He said the criminal offences in the bill are intended to prevent particularly serious harms from the practice.

"No one should be able to change someone's expression of who they are." 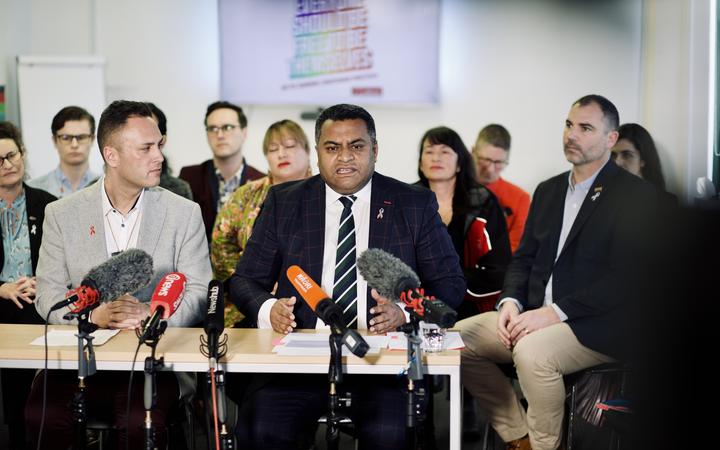 Complaints can be made to the Human Rights Commission for performing conversion practices on another person under the civil law.

The law is set to bring New Zealand into line with other countries including Germany and several Australian states.

The bill will have its first reading in early August and the government aims to have the legislation passed by early next year.

Faafoi said he did not think it had taken long to get the bill introduced, having made the commitment at the election last year.

"What it does do is prevent harm from continuing to happen ... we know that conversion practices don't work, we know they cause harm."

He said he did not know what help was available to help those who have been harmed by the practice, but the government offered a range of services. He said the government does not want cases to end up in court, the idea is to prevent conversion therapy practices.

Faafoi said the National Party had supported the legislation in principle, he had spoken to the Māori Party, and the Greens had expressed support for the bill also.

"We want to make sure that this piece of legislation gets passed."

He said the bill allowed people to express their religious views, but people should not be allowed to change who other people are.

Auckland Pride executive director Max Tweedie said did not believe that law alone would completely get rid of the practice, but it would send a message.

"That the dark ages are over and as a country we don't accept that as being part of our fabric of society.

The queer community was relying also on the combination with proposed hate speech measures, he said.

"Inclusion of gender identity, expression and sex characteristics in the Human Rights Act, that will be a piece that kind of helps reaffirm discrimination being illegal against trans and intersex communities.

"I think we are hopeful that between the two pieces of legislation we'll see that there will be these quite extreme cases - of offering conversion practices and inciting hatred - will be covered and that our communities will still have broad protection when interacting with religious groups.

He said more needed to be done to help those who had already suffered the impacts of conversion therapy, however.

"I'm really hopeful that the legislation will be enough to stop the overwhelming majority of them but also to actually put some mechanisms in place to support the survivors and those that are still living with the ongoing trauma with the impacts of conversion therapy too."

That was a message backed by Trinity Thompson-Browne (Ngāti Kahungunu), who spent over a decade in the pentecostal church thinking that their attraction to women was "God trying to strengthen [their] character".

Thompson-Browne walked away from the church at age 21.

"So I left the church because it was either [that or] if I keep staying in church I'm going to kill myself - that is the reality I'm staring down the barrel of - so I left the church for that reason but then also I've tried for a decade to be straight - it has not worked," they said.

They said they hoped the threat of prison would act as an effective deterrence, but the bill needed to also include better care measures for those who had gone through conversion practices.

"I look at the context of my life and have to be like 'oh, I'm so thankful that I had sexual trauma beacuse at least that means I have access to funded therapy for my decades-worth of conversion therapy trauma," they said.

"I have found ACC-funded threrapy to be absolutely fundamental and instrumental in being able to understand and disassemble my own experiences of disempowerment and self-loathing, really, within the church context."

"You can't just legislate to prevent and not account for the years of time that this has had to go on behind the scenes unchecked."

Green Party rainbow communities spokesperson Elizabeth Kerekere said it was important that the law be in place to hold people to account.

"I think it's part of the healing to be able to actually see that the person who caused that harm is expected to pay the price for that, for those people - for that organisation - to understand that what they did is really wrong."

"We know that our Māori and pasifika whānau that their spirituality is a core part of their cultural identity and so when the harm is happneing inside our places of worship that is really really difficult for our people and so it's very difficult to untangle what is going on."

She said she hoped the hate speech proposals would fill in some of the gaps left open which allowed hatred of queer communities to fester.

"All of this needs to happen to really change how our society thinks about these isseus and the behavioru that people are allowed to get away with."